In an earlier post I mentioned work I was doing to show the importance of tone in the Bantu D30 languages. Here I’d like to go through the conjugation of one verb in one language, to show how tone works, in relationship to consonants and vowels. To start with, here is one verb conjugated two ways: 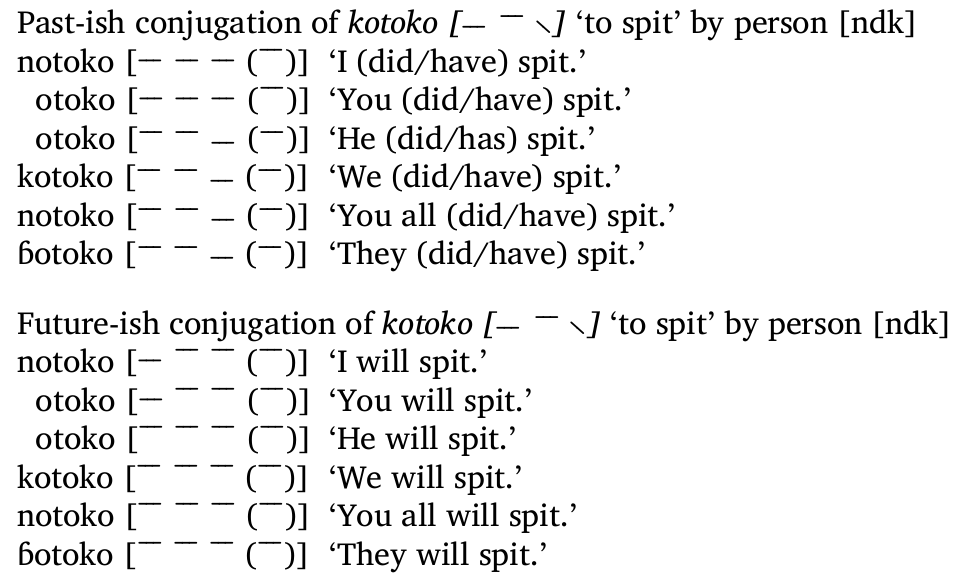 If you have studied another language before, you might recognize this kind of listing of the forms of a verb for each of the people who do the action. In English, this kind of thing is boring:

The only thing of any interest in the English is the final ‘s’ on ‘he walks‘; everything else is the same on the verb. But that’s not the case in many languages, including the languages I’m working with. For instance, there are lots of differences in forms, and you can correlate the differences in forms with differences in meaning. If you line up the verbs as below, you can separate the part that remains the same from the part that changes. You can also notice that in the meanings on the right, there is a part that remains the same, and a part that changes. This is the case for both conjugations: 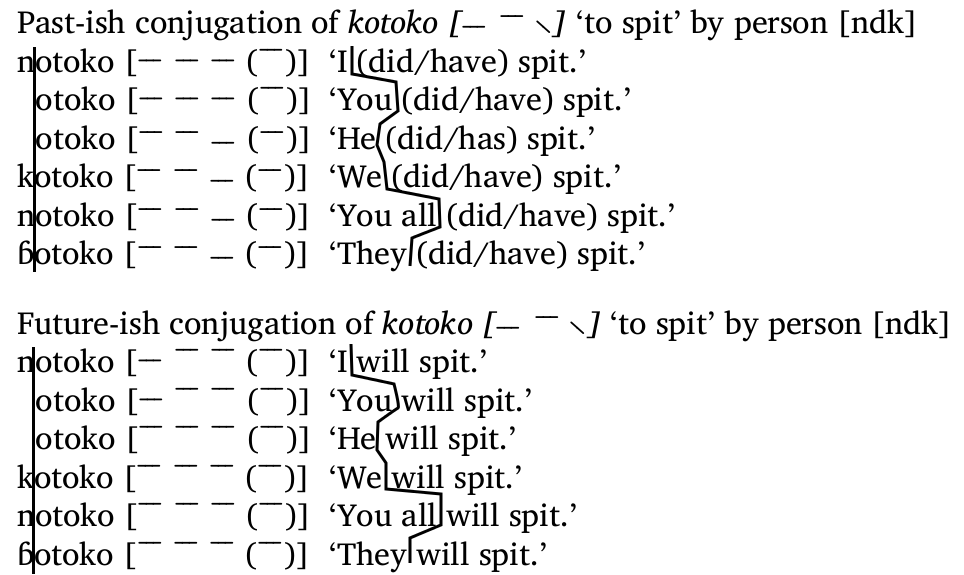 But, you might ask, this logic gives us otoko = “(did/have) spit” in the first conjugation, but otoko = “will spit” in the second. Which is it? In fact, if you compare each line for each of the two conjugations, you will see that the consonants and vowels are the same for each first line, for each second line, all the way down to the sixth line. So whatever form indicates the difference between “will” and “did/have” is not found in the consonants or vowels. Where is that difference indicated? In the tone. If you compare the second column for each line of the two conjugations, you will see that the lines representing pitch for each word form is not the same between the two conjugations.

A similar problem exists for the prefixes that refer to subjects. That is n- is used for both “I” and “you all”, and the absence of a prefix is used for both “you” and “he”. But looking at this last one first, we can see a difference in the tone: 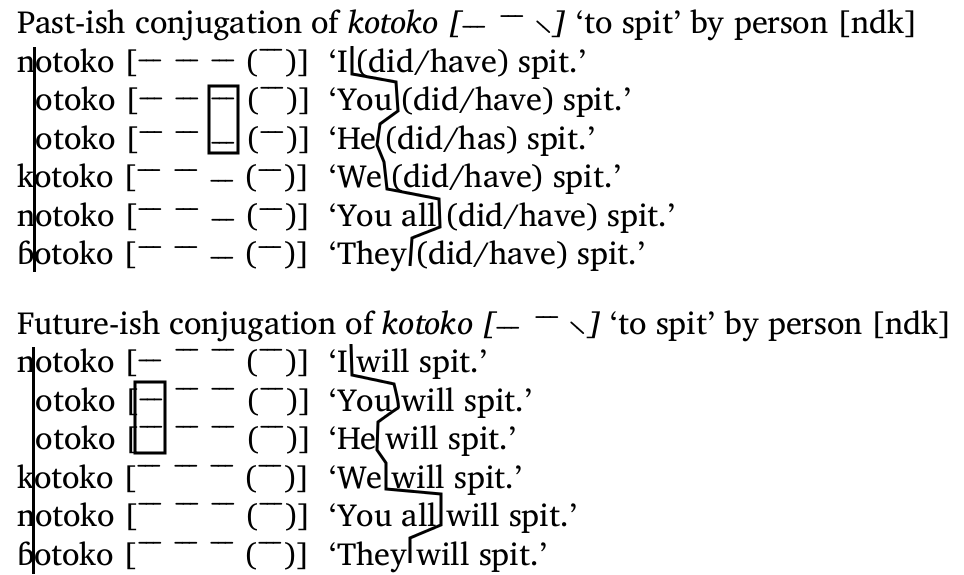 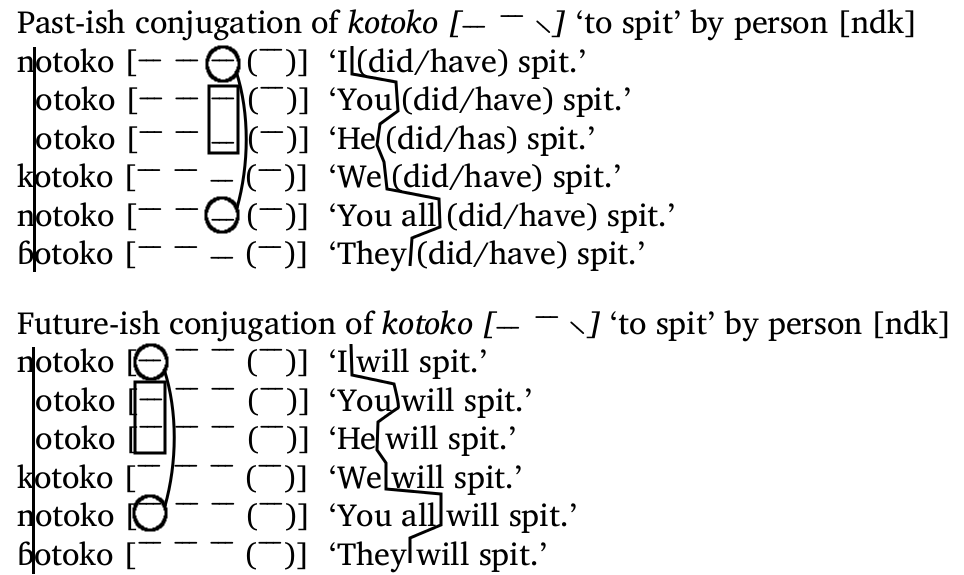 But the story is a bit more complex than that, since the tone doesn’t do just one thing. We saw above that tone indicates the difference between “will” and “did/have” in these conjugations. But tone also indicates the difference between c, as well as that between “I” and “you all”. That means “you will”, “you did”, “he will”, and “he did” all have the same consonants and vowels, and are only distinguished one from another by the tone. And there’s another quadruplet with “I” and “you all”, and these quadruplets exist for almost every verb in the language: this is a systematic thing.

Anyway, that’s the essence of what I do, in brief. By looking at the actual pronunciations of words in a system, we can deduce what the contribution of each meaningful word part is, then make hypotheses about how they come together, and test those hypotheses until we come up with a coherent system.

I just finished drafting the line “good progress on dictionaries for each of the languages” for the newsletter we’re hoping to put out in the next couple days, and I realized I’m not sure that it is clear to all why that is a good thing.  So here’s a bit of a rationale.

From what I understand of the history of dictionaries in English, one of the main reasons people do them is to help standardize the writing system.  Have you ever asked how to spell a word, and been told to look it up in a dictionary?  Perhaps that doesn’t happen so much anymore, but in any case, dictionaries can be an authoritative source for spelling information. I have even understood that one of Webster’s goals was not only the standardization of American English spelling, but also the creation of a distinctly American English. Have you used the words colour, litre, practise, paralyse or programme? If so, you’re probably British (or learned your spelling from a Brit). Nothing against the Brits; it’s just that spelling is one way of saying “this is who we are”. While I’m hoping that the communities we work with in the DRC won’t spend much time distinguishing one dialect of their language from another, I do hope they will spend time clarifying their identity in their writing system.

I want this for two reasons.  First of all, a lot of Bible Translation is about identity.  If we are going to help someone translate what will be seen as a foreigners’ Bible, then we might as well stop today, since these people already have second and third language Bibles. Additionally, this is not the promise of the scriptures. Rather, it promises “…a great multitude that no one could number, from every nation, from all tribes and peoples and languages… crying out with a loud voice, ‘Salvation belongs to our God…'” (Rev 7:9-10 ESV). I don’t see this promise as just lots of different Christians, but people from each of the 6,000+ languages of the world seeing God as their own God, and worshiping Him as such. We don’t want to just translate and print books; we want to see the impact in individuals and communities of the Holy Spirit working through the written Word of God. This impact is hampered if you’re reading a Bible that continues to tell you that God is talking to someone else, not you.

The second reason I’m in favor of standardization has to do with fluency.  I’ve seen a lot of non-fluent reading of the scriptures, and I personally find it painful. And I imagine it must be difficult to have the kind of impact I mention above if the reader stumbles often in the reading, and/or has to read something multiple times to get the meaning. As a result, one major motivation for my work is to see people reading fluently. I want them to read without stumbling, and to get the sense the first time they read. I want pastors to be able to read the scriptures in the middle of a sermon without creating a major break in the thought flow. And I want to do everything I can to remove any barriers to fluency which arise as a result of the writing system. That normally starts with getting the consonants, vowels and tone correct, but it also includes people knowing how words are spelled, and identifying the correct word and its pronunciation quickly as they read.

There are two other arguments for dictionaries as part of language development, one of which is sociological, the other linguistic. Related to the identity question above, many peoples I’ve interacted with don’t see their language as valuable, and this opinion is often shared by outsiders. I once heard a “real language” as “you know, one with books”. I think I know what that person meant, but if it takes a book to give a language respect, then I want to be a part of giving them their first book. And people get this. Seeing someone look at the first booklet in their language (as little as 15 pages, with lots of pictures!) is an amazing sight. They immediately get that someone does finally care about them.

The linguistic argument is that in order to do good dictionary work, you need to do a lot of other things which you already should be doing anyway: collecting and analyzing texts, checking pronunciations, helping the community decide how words should be spelled, including diacritics, spacing, and punctuation. All of this analysis helps build not only the dictionary, but our understanding of the language more generally, perhaps more particularly how the sound and writing systems will interact. I hope it is clear why one would want to do this before publishing much in the language; anything you publish without really understanding how the writing system will work may need substantial revision, and anything you publish creates a precedent that you will have to fight against in making later changes (and if you don’t see how precedent can trump sound reasoning for spelling changes, just look at English).

So our ultimate goal is life transformation through the Bible, but to get there, we want to see that the community is well placed to have and use a Bible that is theirs, that can and will be read fluently and with power, and dictionary work helps further all of those goals. 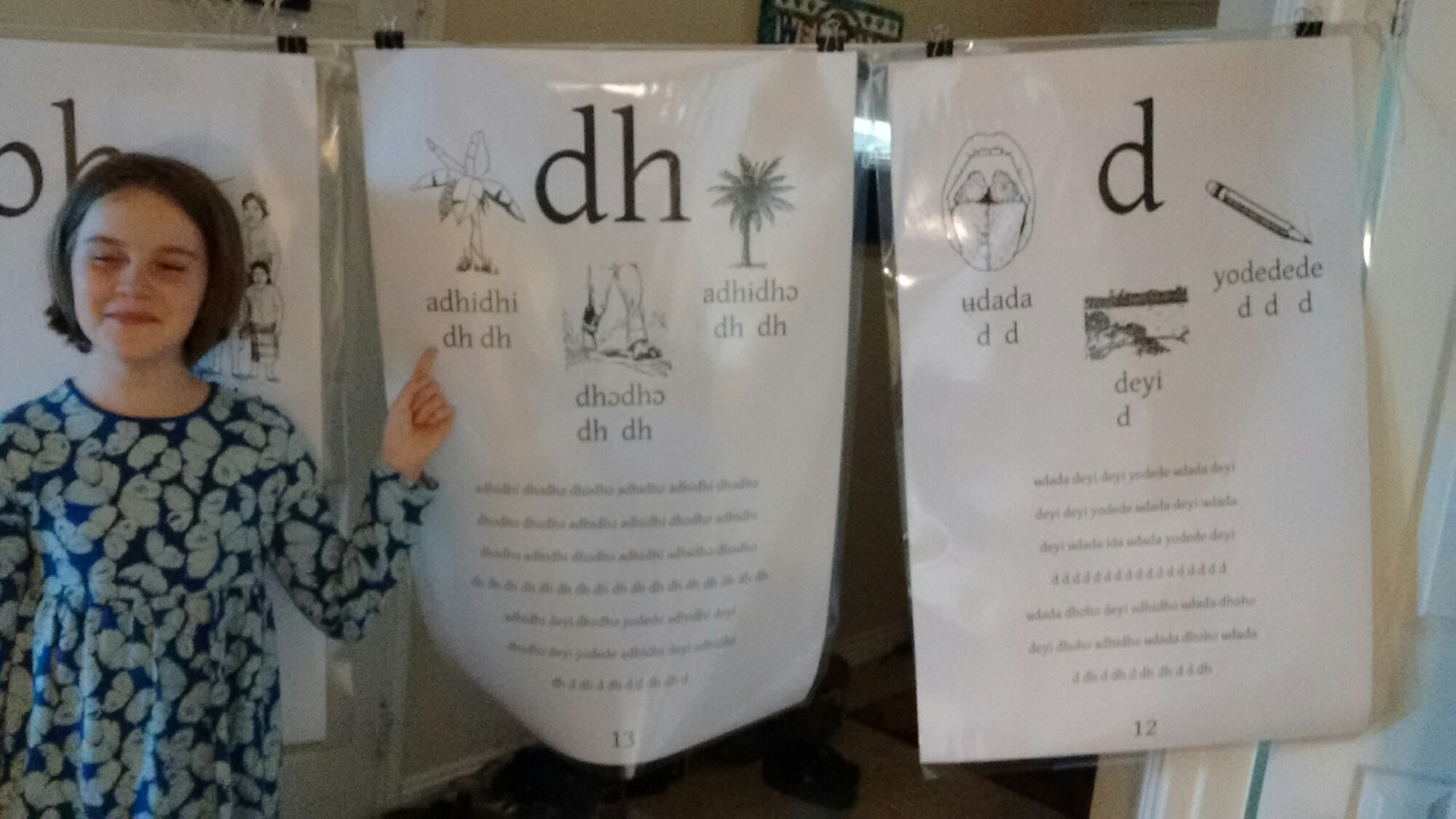 Today I started printing the posters I’m making for my trip to DRC at the end of June. They should be large enough to be seen by people a long distance away, so they can be used in large classrooms/venues.  The last time I was in Nia-nia, they did some basic teaching with small drawings on a chalk board; hopefully this will help make grassroots literacy more effective. In another location, I had the opportunity to help our local movers and shakers present alphabet work in an open marketplace –so we’re ready for anything!

For interested readers, Anna is pointing to the poster for the egressive (air going out) voiced (vocal cords vibrating) stop (consonant where no air passes) made just behind the teeth. This is different from the implosive (air going in) stop at the same place, on the right. They have a similar contrast for stops made with the lips (‘b’ and ‘bh’). I’ve also made posters for the nine vowels, to help teach contrasts between vowels that they have not been writing (similar to the difference between ‘beet’ and ‘bit’ in English), for a total of 13 posters for this language.