Here is my mind map of this passage: 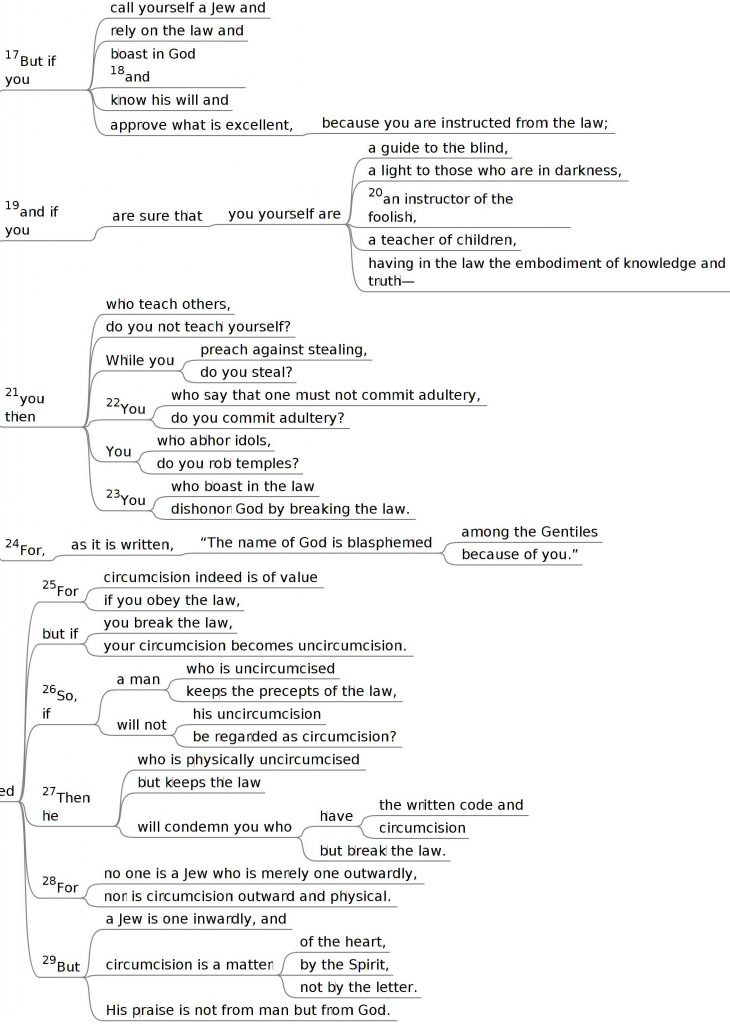 The scrolls is here.
And here are a few questions of my own:

This passage begins with something of a break in subject matter, though with a lot of continuity. If Romans 1:18-23 is really best summarized as “they are without excuse” (v20), then this passage can be seen as building on and extending that point with a different audience in focus: “you have no excuse” (2:1). That is, the break is that Paul is addressing a different kind of sin, and a different kind of sinner, but the main point is the same. Just as the immoral pagans had no excuse, the people addressed here also have no excuse.

Also in the opening verse, I find the passing judgment argument interesting, in as much as one’s passing judgment really does imply that one knows the law that one isn’t keeping oneself, making any excuse invalid. This echoes what is said elsewhere is scripture:

Do not speak evil against one another, brothers. The one who speaks against a brother or judges his brother, speaks evil against the law and judges the law. But if you judge the law, you are not a doer of the law but a judge. There is only one lawgiver and judge, he who is able to save and to destroy. But who are you to judge your neighbor? (James 4:11-12 ESV)

Furthermore, verse 4 tells us of the kindness of God in holding back his wrath, which is meant to lead us to repentance. This reminds me again of a biblical principle:

The sins of some people are conspicuous, going before them to judgment,
but the sins of others appear later. (1Tim 5:24 ESV)

There is also another Chiasm in these verses, as pointed out in the scrolls, from v6-11:

As I find true in other kinds of parallelism in scripture, seeing this structure opens up other ways of understanding. For instance, I would not normally see a parallelism between verses six and eleven, though the parallelism between 8-9 is clear, and between 7-10 is also clear (to the point of using “glory” and “honor” in both). Assuming this is right, which looks correct to me, then we must ask in what sense are six and eleven parallel? That is, in what sense does “He will render to each one according to his works” mean something like “For God shows no partiality”?

The answer to this question answers another question, which I’ve seen come up a number of times this week, which is, how do we deal with the fact that Paul seems to be teaching works righteousness here? Is God really saying “do the law and be justified”, as v13b seems to be saying? Some say that this is a hypothetical possibility that never happens. I don’t think Paul is being hypothetical here; rather, he is either talking about an increase of righteousness which comes by pursuing the law by faith (as claimed by John Piper), or else he is talking about a righteousness which is complete an accomplished by Christ and no one else (though those who are in Christ will share in it, as we will continue to see).

But if vv6&11 are equivalents, then we have another possibility. We generally think badly of “works” because we see them as a way to seek justification, apart from “faith”. But that is not the opposition in view here, by Paul. He is not opposing works with faith, but rather with partiality, or favoritism.  That is, while Paul elsewhere says you are not justified by your works, but rather by faith, here he is saying you are not justified by favoritism, but rather by your works. He is not making the argument that we can be acquitted by our works, but rather that when we meet our judge, he won’t just let us off because we have the right lineage. God is not partial. Rather, he will look at our works, and judge us justly.  Now as I see it, there is no conflict there with justification by faith alone, because anyone who honestly looks at his works, when told that they will be the basis of his judgement, should fall on the floor and cry “mercy!”.

So it is “the doers of the law who will be justified” (v13b),  but anyone with a clear view of himself will know that doesn’t apply to him. I am not a doer of the law, but a judge of it (2:1, James 4:11-12). I like to apply the law to others, rather than do it myself. And even where I want to do it myself, I fail. So any honest take on myself should tell me that either I trust the only one who really has done the law, and receive his mercy, or else there is no hope to be justified for me.

Fortunately, this is precisely what Jesus offers us. He has accomplished the law for us, and offers to pay for our sins, and provide us a righteousness which is not tied to our works, but which does nonetheless impact our works, and bring us slowly by slowly more in line with his own obedience.

But we won’t do that, so long as we hold on to the vain hope that our decency, or our lineage, or our club or church memberships, or anything else, will give us an in with the judge. If we think we can bribe the judge to provoke favoritism toward us, why would we ever give up on our works and trust Christ?

Finally, I think it is interesting that there is little in this text to state the ethnic group Paul is addressing here. I have long thought this passage was addressing Jews, but I was challenged this weekend to reconsider, and I think it is better to look at this section as being toward moral, or decent, people, of whatever ethnic group. Maybe they are Jews, maybe they are Gentile pagans. Whatever their ethnicity, they keep their lawns well manicured, and don’t get drunk or sleep around. But while they are not the hedonistic pagans described in 1:18-32, nor clearly the Law depending Jews of 2:17ff, these decent people also need Christ, and cannot count on their decency  to save them, whether that decency is derived from Abraham or Greek or Roman civics. We all need Jesus; there is no excuse for any of us.

Here is my mind map for this section: 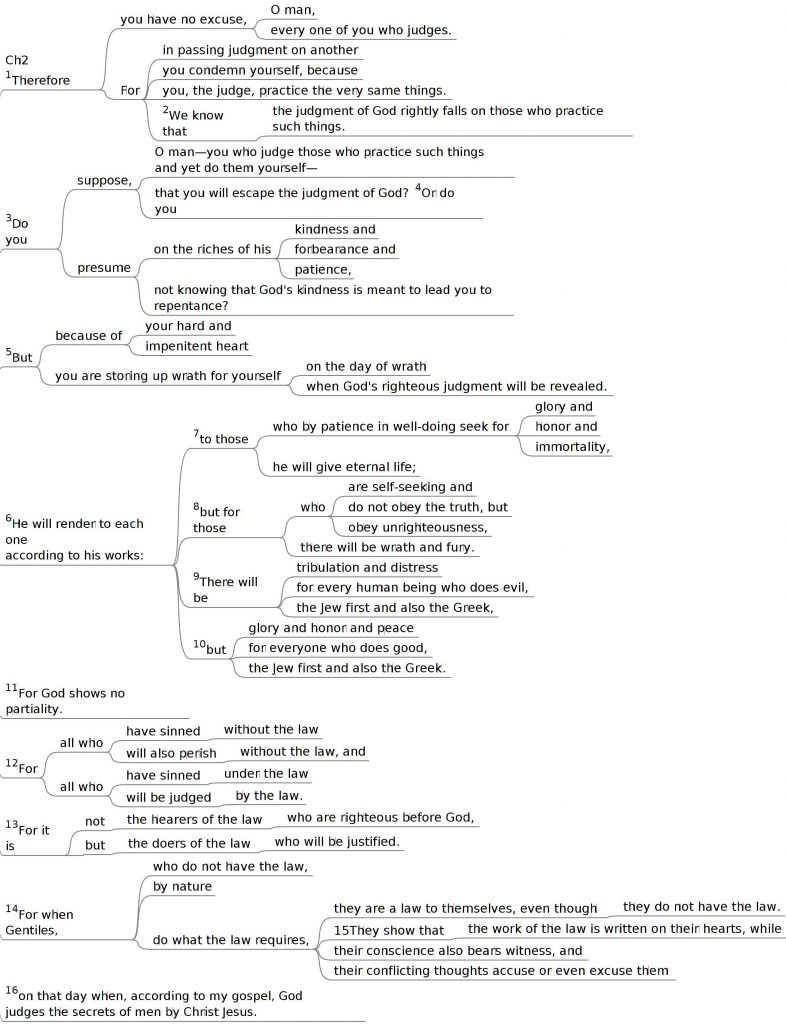 You can get a copy of the scrolls for this section here.

And here are a few questions of my own:

Who is Paul addressing now?
How does the reader condemning himself?
What is God’s judgment based on?
What is the purpose of the questions in v3-4 ?
What is the source of this person’s treasure/store of wrath?
How does Paul describe ‘the day’?
What will the judgment be based on? What is it not based on? Describe each group.
What will each group get? How is there “no partiality”?
Who gets ‘tribulation and anguish’?
Who gets ‘glory, honor, and peace’?
What does ‘partiality’ mean here?
What happens to people who sin without the law? And ​ with ​ the law?
Who will be justified by the law?
Who was the Law given to? Who will be judged by it?
How can those without the law be justified by it?
What role does the conscience play?
What will God judge? (v 16)
What role does the conscience play in all this? 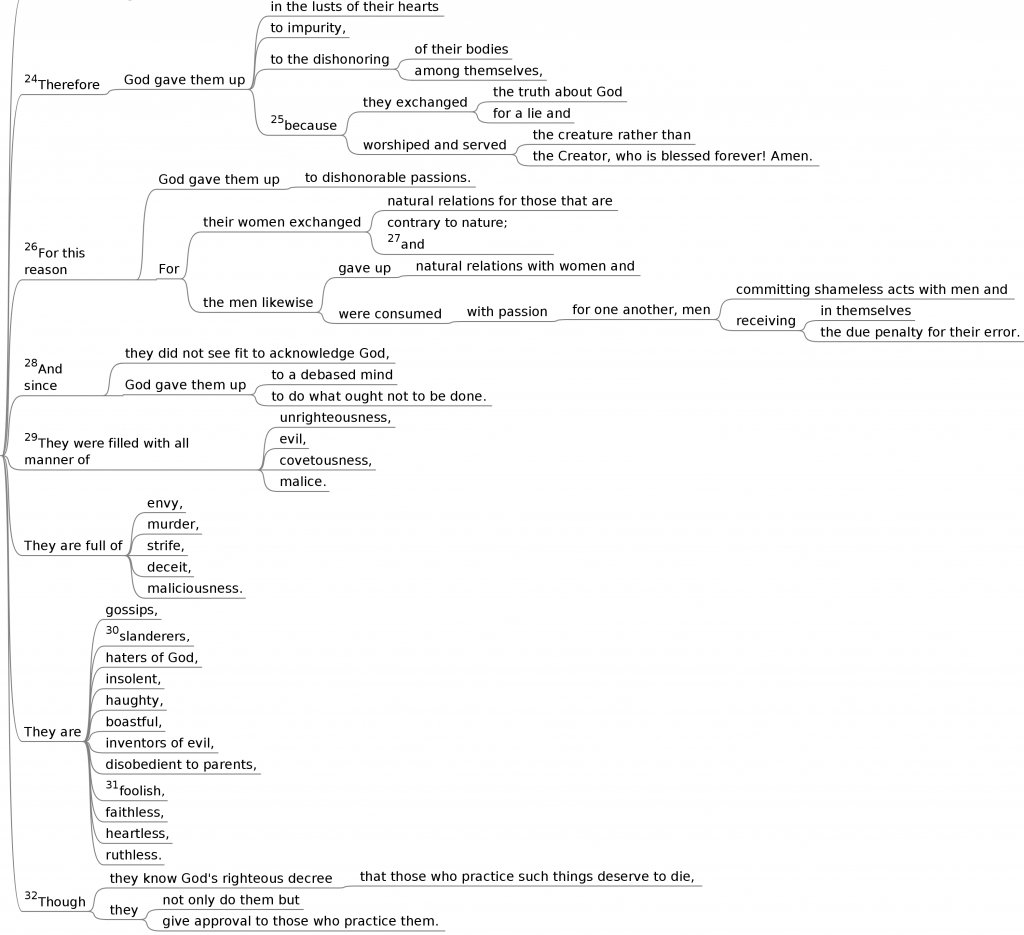 You can find the scrolls for this next week here.

And here are some more questions to get you thinking:

As I thought through the structure of this passage (especially in making the mindmap here), I noticed what at first seemed a lopsided structure. That is, it looks like the first half is pointed forward to the end of v20, while the last half is pointed back to it. But then I recalled an old poetry class, where we looked for what we called fulcrums, the point on which a poem turns in mood, emotion, whatever. And I think this happens with prose, too, as the flow of an argument turns on the main point of a section.

That is, as Paul writes “.…So they are without excuse. For.…”, he is building reasons before and after what I now take to be the central thesis of this section, that people are without excuse. There is no way in which people will be able to say to God, “But .…” and avoid his wrath on that account. His wrath is revealed, and there is no excuse.

Another point of detail, that a number of people I talked with this weekend missed, is the object of wrath. Later, in ch 9, Paul seems to talk about people as “objects of wrath”, but I don’t think that’s what’s going on here. If we look carefully at the opening verse, “the wrath of god is revealed from heaven against all ungodliness and unrighteousness of men”, we see that God’s wrath is against our ungodliness and unrighteousness, not against us. This of course immediately begs the question of the difference, but I think it is important. If God’s wrath is against our sin, then we have options. That is, will we keep our sin, and hold it close to ourselves, and get burned up with it? Or will we let it go, and escape that wrath ourselves? As Christians, we understand that the wrath of God against our sin was satisfied in Jesus as he bore our sin on the Cross. Our sin has real consequences, real wrath. And as we trust Jesus, he bears that cost, so we don’t have to, so we can survive the coming day of wrath, and even some of the wrath that is currently visible (IMHO).

So, when we talk to those who don’t honor God or give thanks to him, we can have confidence that this isn’t because they are truly ignorant. There is something in each of us that gives testimony to the presence and character of God. And nature itself screams out his eternal power and divine nature, as we see the beauty and order of what he made, and as we see that what he made was clearly meant to outlast us.

Someone said that we must deny the truth about God, if we are going to allow ourselves to keep sinning. Because if we allowed ourselves to feel the full weight of that truth, we would be forced to change –to get out of the way of that bus coming at us, rather than tell ourselves it isn’t really going to hit us.

One final note, given the presence of idolatry in this passage. We may have a hard time connecting to this charge today, since we don’t think about idolatry much. But if we think about the things that we sacrifice other things for, the things we cut out time and energy for, those are the things that are truly valuable to us.  And personally, I was sickened to watch players kiss the Lomardi trophy last Sunday, as happy as I was with the victory. 😉

Let’s not forget to let the reality of our sin and God’s wrath sink in. As we consider what the power of God for salvation (v17) is saving us from, it is important to understand clearly what the consequences of our sin are, both for today and in eternity.

The link to the scrolls is here.

Here are some other questions to get you thinking:

1. Does Paul seem to change the subject in this section? How/Why?
2. How does he describe the objects of God’s wrath?
3. What are they suppressing?
4. What did God show them? How?
5. How did they respond?
6. How did God respond to their suppression?
7. How does Paul describe them in the end?
8. How should these people have responded to God’s judgment?
9. How should you respond to God’s judgment?