I’ve been trying to grow a proper plant this summer, with minimal results. I have ten peppers, but only one ripening, and only this much. Anyway, I figured should eat it now, since it will be overdone when I back. The first fruit of this mission, as it were…

After a couple days of struggle, and finally giving up, Kim made one more call. God parted the clouds, and let the rainbows through.  The tickets we got today are a bit more expensive than the ones we originally had, but they’re actually better, in terms of the connections in the Entebbe airport. Praise God!

So Joel and I fly out this  Wednesday, and return in just over a month. If you want to pray more specifically for this trip, you can sign up for updates here. 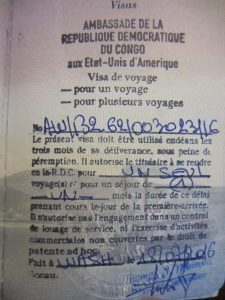 At long last (after 70 days, 10 weeks, or 51 work days, as you like) we have our passports back!  And they contain valid visas!

So now that we have official permission to enter Congo, we need to rebook tickets to Uganda, as well as organize logistics to get into Congo, as well as on to Nia-nia. Please pray for us as we figure out our options at this point, and make final decisions about our new schedule hopefully in the next few days.

One major issue is the fact that the cost of tickets is much higher now than in a month or so (as would be expected of getting tickets at short notice). But in a month, Joel would not be able to come without missing school. So we’ll need to figure out what kind of balance we can achieve between a raised ticket cost, and the other goals for this trip, including when other people are available to help. Please pray that we’d get this figured out today, or at least in the next couple days.

It’s been a couple weeks since I’ve written, so I thought I should post something about how things are going. Not because I have something new to say; things are still pretty much where we last left them, with our passports in Washington, D.C.,  and us unable to do anything until they come back, and us not sure when they will come back, or whether they will have visas in them when they do.

We have heard from a number of sources that the whole system is slowed down due to changes in how Congolese visas are approved, and that this isn’t political or personal. So it may be that we do get visas in advance of the constitutionally required elections in DRC this November –regarding which some have expressed doubts that they will happen on time.

So in the mean time, I’m following advice from our support team, and moving forward as I can with my doctoral work. I had hoped to make two more trips to DRC before I finish, but that may not be ultimately possible. These last couple weeks, I’ve been organizing material that I’ve written over the last couple years, but had not compiled in one place, as well as catching up on comments on some of that material that I had not yet incorporated.

I’ve also organized some of the data that I haven’t finished analyzing, and I will continue to get what I can out of that. It may well be that I can make tolerable doctoral work out of it, though that was definitely not plan A. But it seems like this is maybe something God is working on in me; making me willing to accept a lower standard of excellence than I know I’m capable of.  As one of the founders of the modern Bible Translation movement said, “There are some things that are worth doing, that are not worth doing well.” (or something like that).

For a perfectionist with anxiety issues, this is a hard pill to swallow.  But perhaps that’s why it seems to be next on God’s list. Anyway, I’ve seen a number of times in this program, where I have been forced to simply submit what I consider B level work, and move on. Not that I’ve ever actually gotten a B (there is grade inflation, after all), but I have had to continually face my own lack of satisfaction with my work. And I think it is true, that some things just need to be done, and spending a lot of time and energy doing them really well is a waste. For instance, today I cleared the back yard of dog poo. I think there’s a basic level of time and energy that it’s reasonable to spend on that, and it’s not more than an hour (unless maybe you’ve really let it go…).

Likewise, a paper that is necessary to pass a class, but which will never be published, is not one that merits getting it just right. Even some papers, I can tell before finishing them, that I’m going to need to move stuff around (and add it to other work, for instance) before it would make sense to a broader audience. Time and energy spend word-smithing those papers is a waste.  Once the overall structure is in place, and the analysis finished, then finer touches make sense.

In any case, I feel the need to plan for the possibility that I may not be able to enter the DRC in the next couple years, which would mean either waiting to finish the doctorate, or finishing it with the data that I have already. No one has advised the first, and several people have advised what amounts to the second (“Get this done; don’t delay”). While I’m working on that, if Congo opens up for me, I’ll make a trip, and see what happens. But in the mean time, I’ll execute the plan that I don’t desire, but which seems to be the one God is offering me.