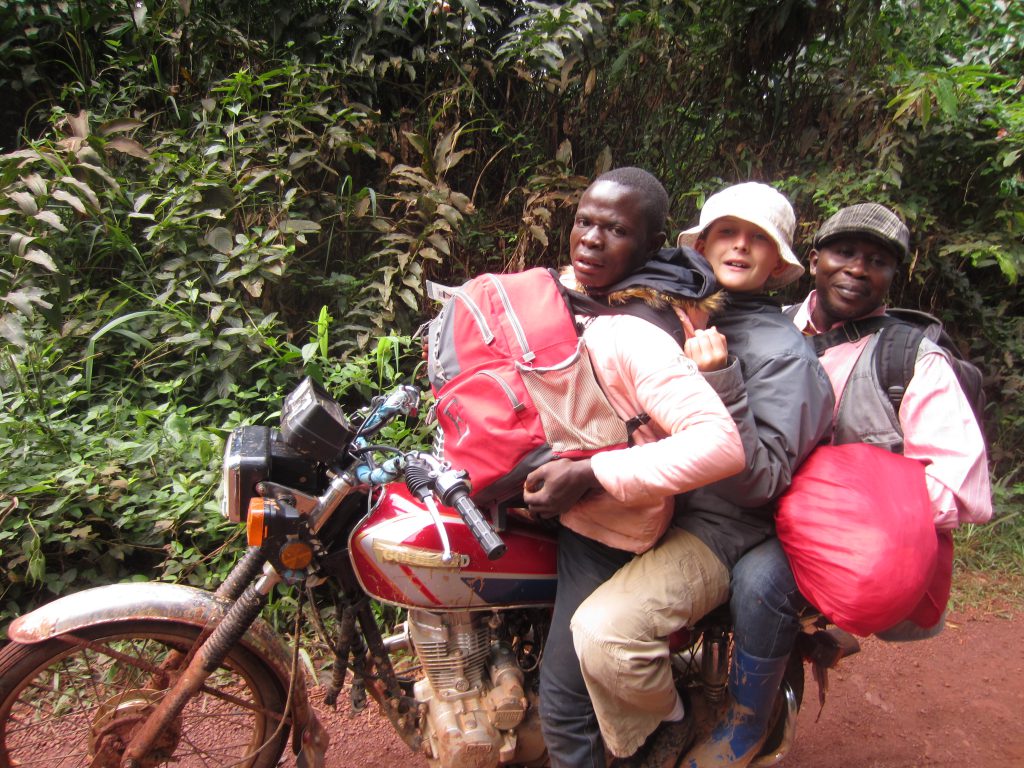 For our second weekend in the rainforest, it seemed right to visit Simon’s father’s church, which was just 25 km north of Nya-nya — in fact, while it has another name, it is typically referred to as “25km”. Simon’s father traveled down to work with us a lot in 2014, and some this year, too, and I figured it was about time to visit him. But I had no idea how far away 25 km (15.6miles) was.

First of all, let us be clear that Joel had a blast. Four hours on a motorbike (yes, that’s less than 4mph!) through the brush and mud, with butterflies flying in his face –he enjoyed himself thoroughly. And that was being squished between Simon and their driver, who wore Joel’s backpack on his stomach (above).

Along the road, we ran in to a traffic jam: 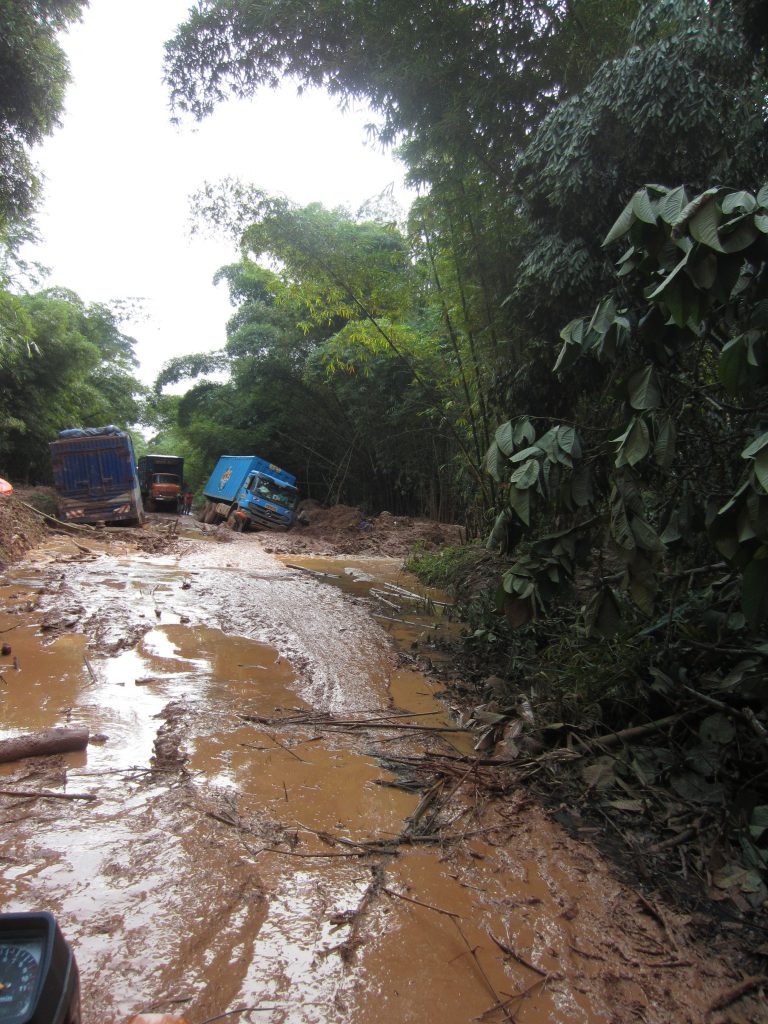 With trucks stuck on the mud on both sides of the road, trucks could not get through. And this is the major road south of Isiro, where a number of the Bible translation projects we support work. Since there were therefore lots of trucks trying to get through, there was a line on each side of the jam (I think I counted about 14 trucks on each side): 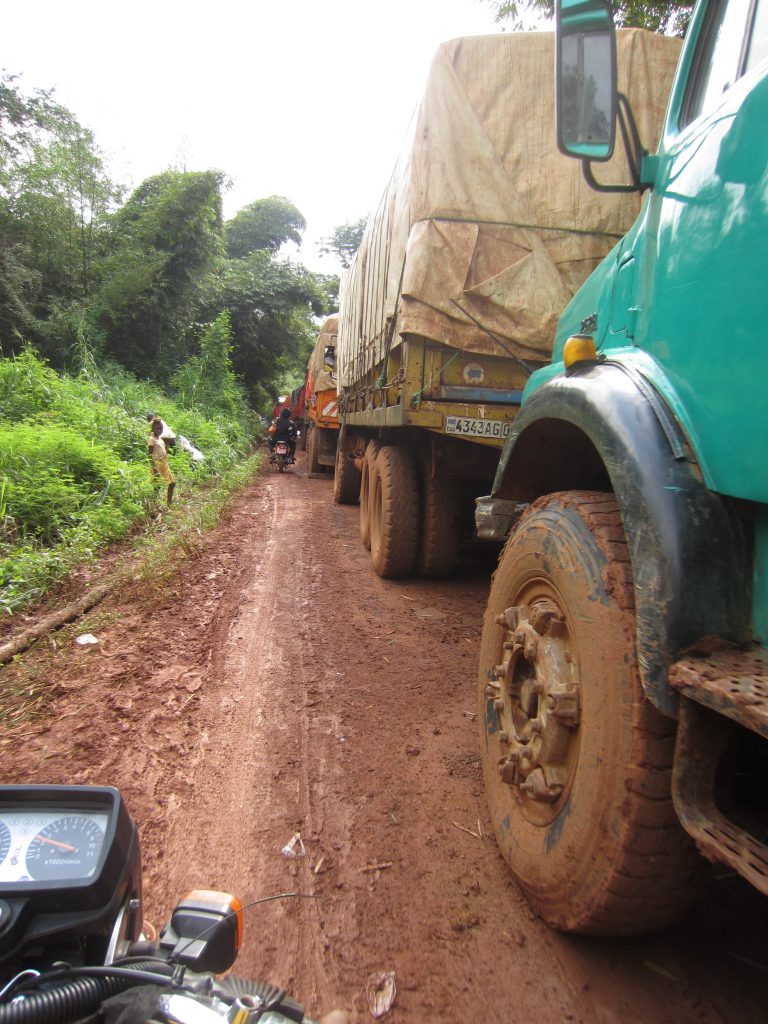 When we got to the jam itself,  the trucks were truly stuck: 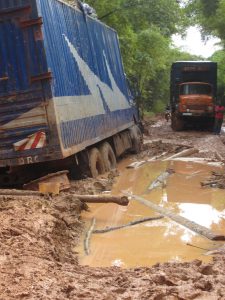 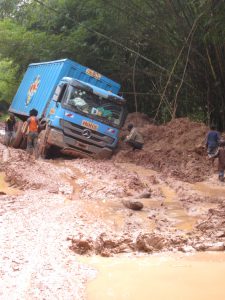 Which is just another reason we travel by motorbike, as we were able to get through 🙂 : 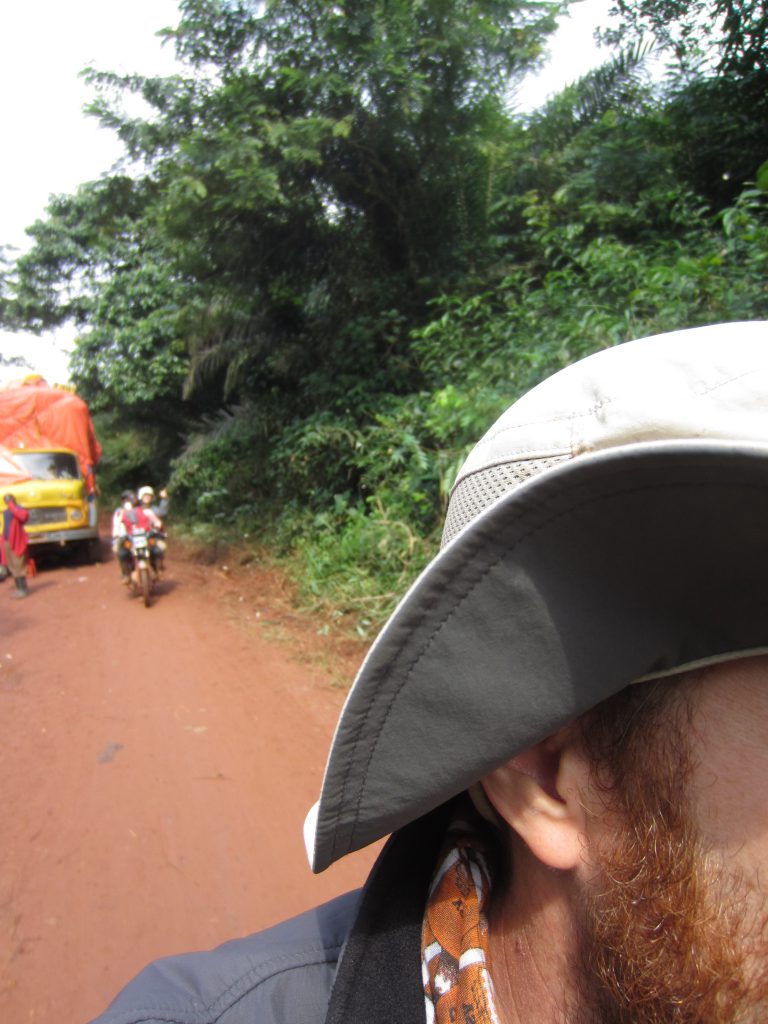 When we got there, we of course got a “welcome visitors” song and dance: 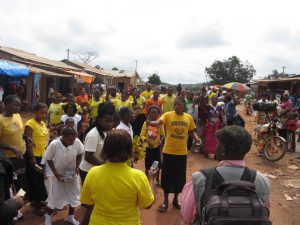 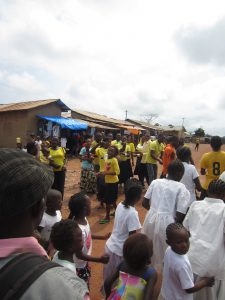 and we ended up with confetti on our hats: 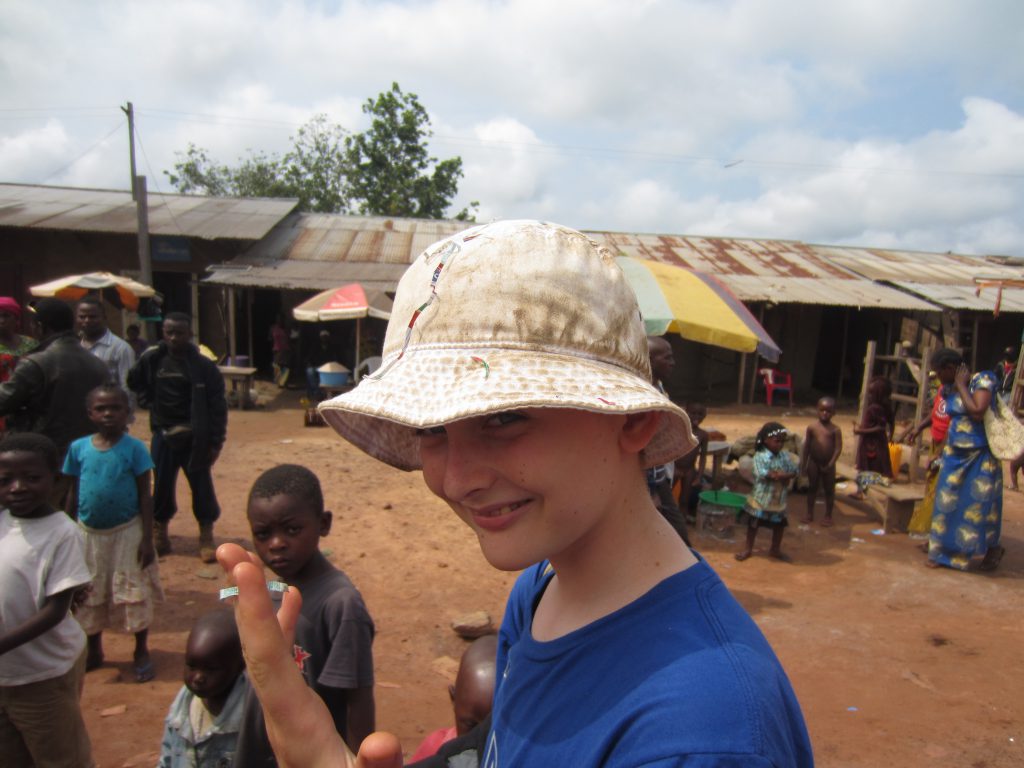 and on the ground: 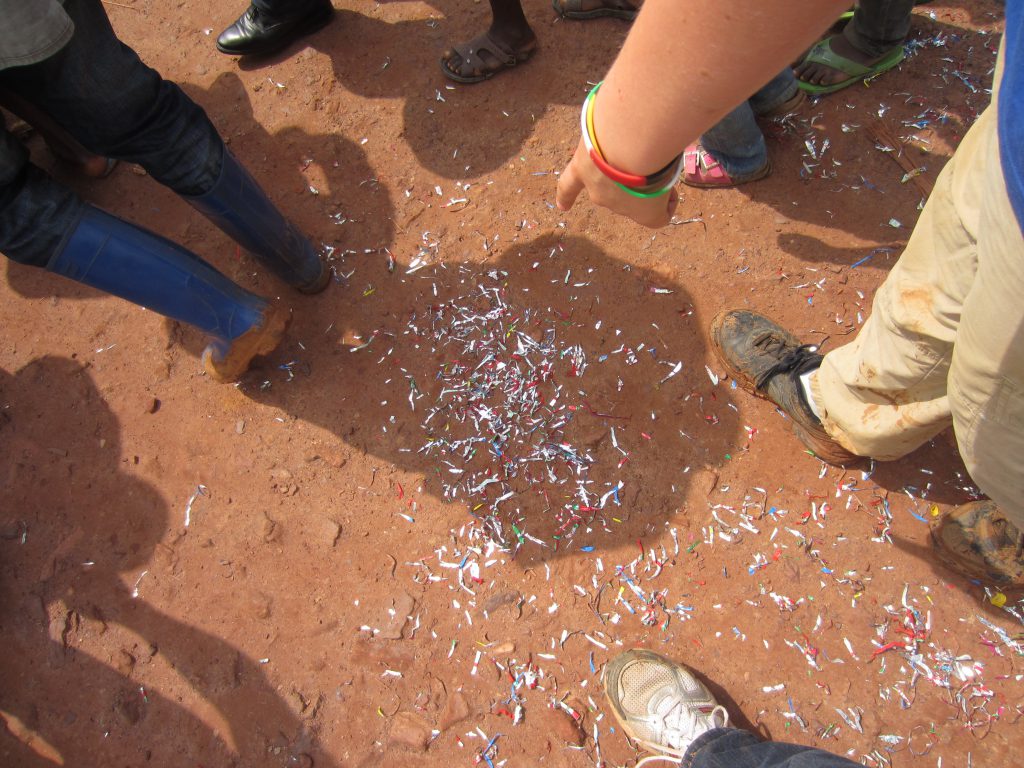 I’d like to say that the road was clear on our way back, but it wasn’t. So I asked when they expected it to clear.  Apparently they’d been there some three weeks, and it would be a couple more. ;-( On the brighter side, the governor had a grand opening ceremony a few days later for construction on that road (which had already started), and it sounded like they were sending some vehicles up to clear that blockage. Nowhere else have I seen such a strong juxtaposition of struggle and joy. 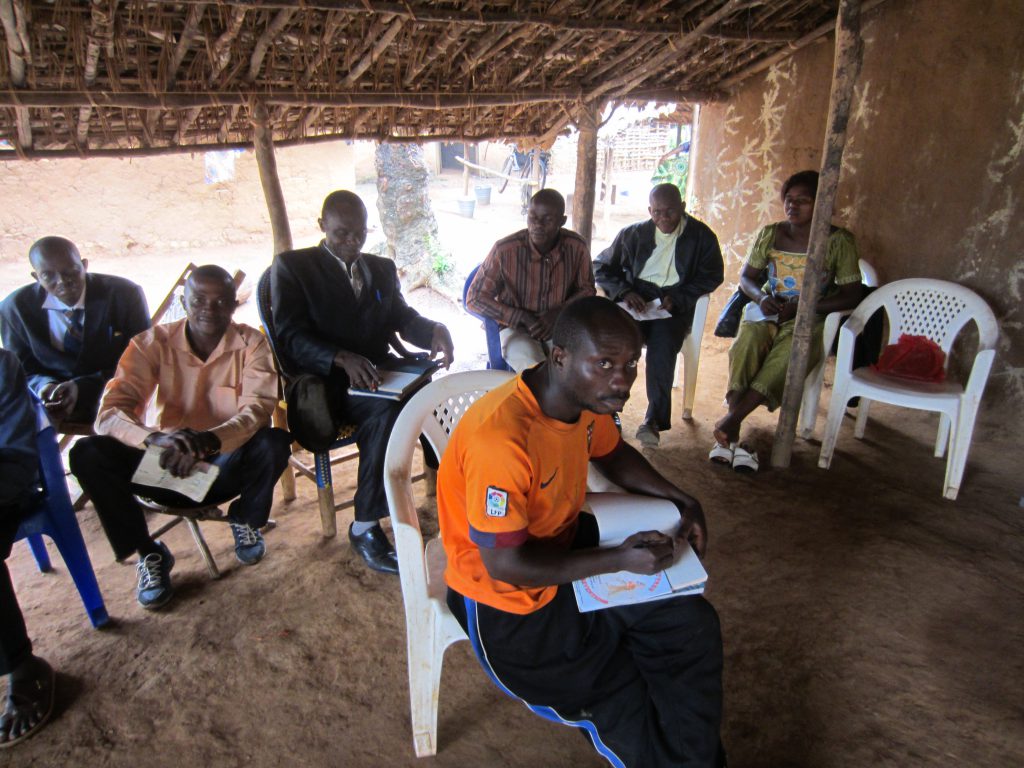 It hasn’t always been easy describing what I do to a broad audience, but for some time now on immigration forms requiring a short answer, I indicate my profession as “Missionary Linguist”. I heard a chapel talk at the first SIL summer training I went to, in Eugene, OR, on doing good social science as a Christian. Tom Payne talked about how academics often look down on missionaries, and vice versa. But the dichotomy isn’t valid, he said. And since then, as I think about what I do from time to time, I consider that one of my greater joys is to do both serious academic work and serious mission work — and that these are not exclusive. In fact, I think they can be very much in support of one another.

This is strikingly clear in D.R.Congo, where it could be said that most of the functioning social bodies are religious. If you are unwilling or unable to work with a church, you will be hard pressed to find people to work with, and you will be on your own in terms of your daily life logistics, like how you will eat, sleep, and get around. But we have the joy of working with a number of church partners, and of working in a way that is clearly for their good, all while doing good academic work.

The above picture is from the covered area where we did most of our work this summer. We started out each day with a meditation on a portion of scripture.  I did this in 2014, too, but I wasn’t sure how much they actually liked it, and how much they were just putting on a good face.  So this time I asked directly,  and they said they like it, for a couple reasons: first, it makes it clear to everyone that this is church work, and that it is worthy of their support; second, it provides spiritual food for the workshop participants. Wow. I hadn’t anticipated that a minimal (30 mins) daily commitment to share with them from the Bible would impact them so much.

So I committed to not sell them short, and we walked through the first half of Romans during our three weeks together, ending in the closing ceremonies with Romans 6:23 – For the wages of sin is death, but the free gift of God is eternal life in Christ Jesus our Lord. I knew that there were a couple Muslims in the group, and they didn’t always show up for this part, which was OK with me. Because I got to talk through some really good stuff, and I could see that those that came got it. For instance, having talked through the pervasiveness of sin in chapters 1-3, we talked about 3:21-22 – But now the righteousness of God has been manifested apart from the law, although the Law and the Prophets bear witness to it— the righteousness of God through faith in Jesus Christ for all who believe – and the theological earthquake these verses caused in the protestant reformation. I continued to feel the freedom to simply read and explain the scripture, and enjoyed again seeing the logic of Romans unfold – They sin, we sin, we all sin, we all need Christ… Then some time later I noticed that a large chunk of my audience was Roman Catholic. 🙂 But that was not a source of division.  We want our work to benefit the whole community, including everyone who identifies as Christian. We want everyone involved to be transformed by the Word of God in their language.

But the fact that we’re serious about getting the Bible to the grassroots of the church, and in a way that can reach even those outside of the church, doesn’t mean we aren’t also doing good academic work — which we are. Whenever I start working with people who are used to manual labor, I explain that our work doesn’t use a hoe, but it is work nonetheless. And there always comes a time where people are grabbing their heads and saying “wow, this hurts!”  We had plenty of those moments this time around, as people grappled with the implications of what we were discovering about their language – but more about that (including the octuplets) in another post, I think.

One other point relevant to this topic is the need to make community development truly community based, and my work as a missionary linguist facilitates that. Because I depend on the church to do my academic work, and because my academic work is for the benefit of the church, the church has a strong share in finding out what we’re doing. They have a right to accountability, which goes hand in hand with the fact that we want to share what we’ve learned.

I made some posters from the pages of the vowel booklet we made in 2014, which we then modified to add tone marks to. These became a medium for us to share our insights. Here is Simon sharing from these posters, after service at the church we attended our second Sunday in the area: 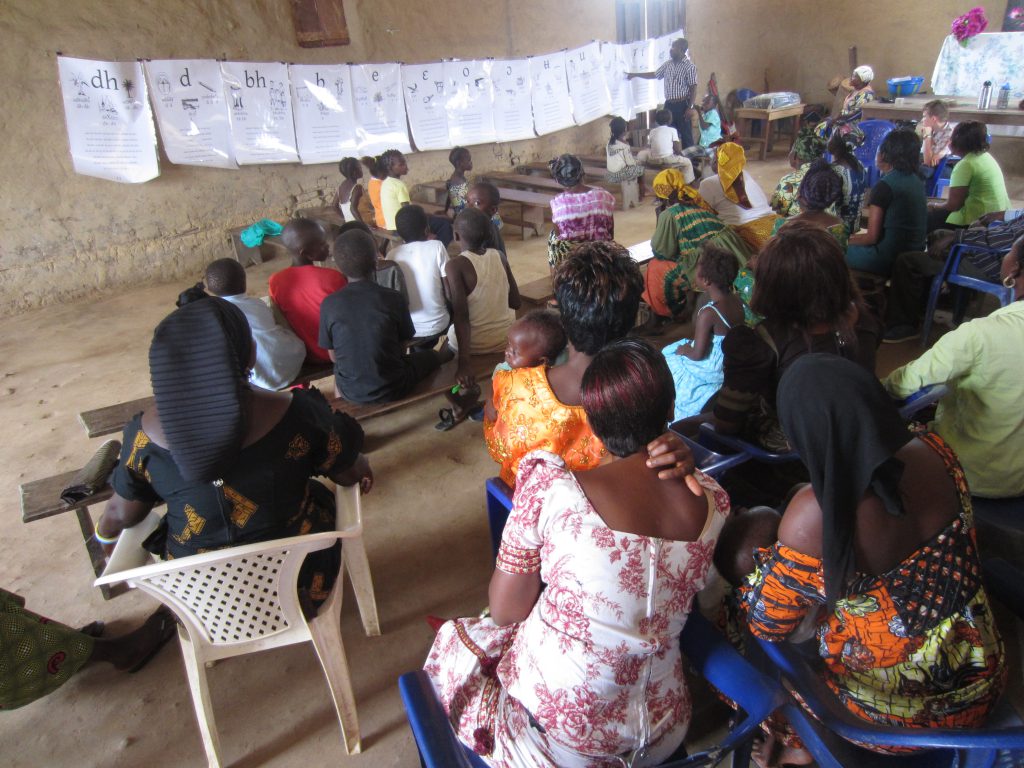 This is another great aspect of combining my various responsibilities – most people agree that we should be training and mentoring future leaders, but we don’t necessarily make it happen, if we’re able to do our work without it. I could have done this presentation myself, but it just made so much more sense in this context to have Simon do it. His father is pastor at this church, and him presenting gave them a chance to have a few back-and-forths in Ndaka, which would (obviously) have been beyond me.

Not only did we get the word out, but we also got to practice doing it.  The next Sunday, we were at another church, after which we gave a presentation to them: 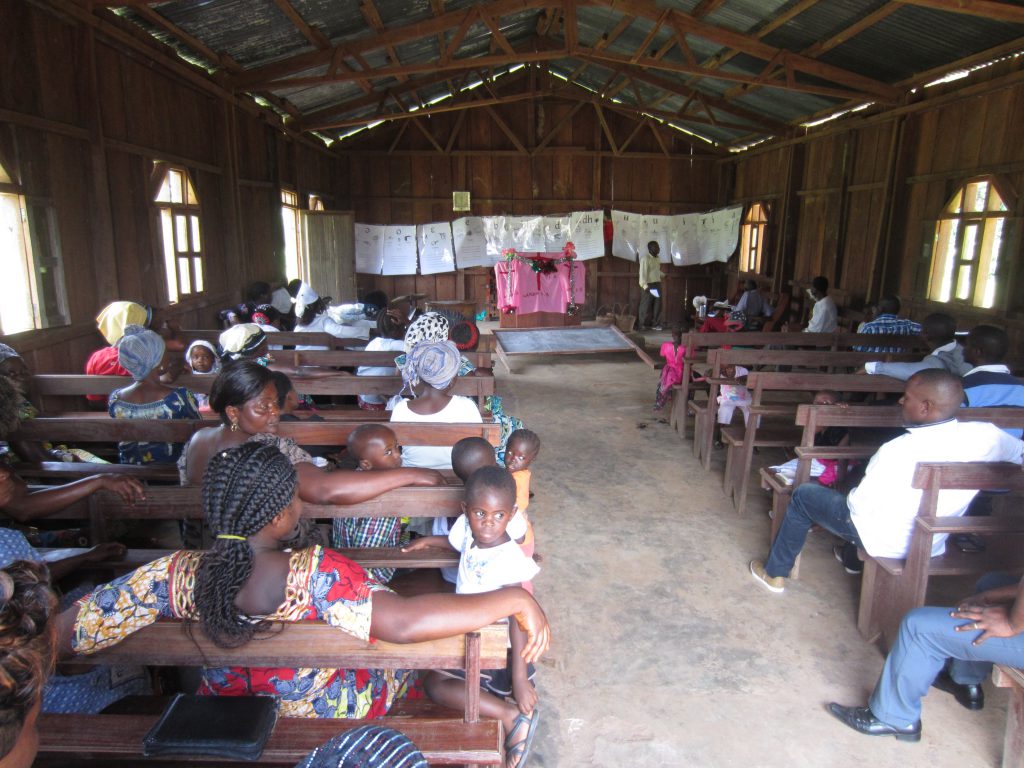 And then a few days later, in our closing ceremony, we gave yet another presentation, this time in the church that was hosting the workshop: 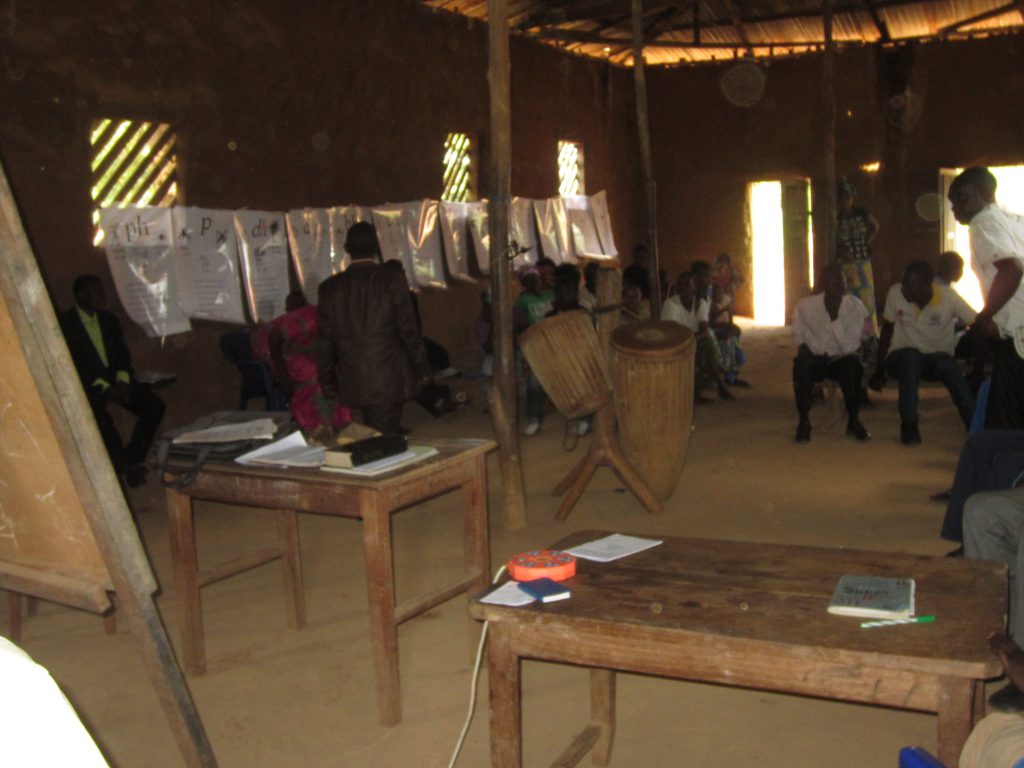 So the bottom line here, for me, is that we got to build up the church through teaching, mentorship, and grassroots showing that we care about their language (which is a bigger deal than you might think) –while at the same time we had unparalleled access to speakers of the language, that were ready and willing to bust a few brain cells figuring out how tone works in their verbs. So I’m proud to say that I’m a missionary linguist — doing what God made me for, to His glory.

Hi all — Kim and I finally got away this weekend to get some  rest and find ourselves again. As the dust has settled after this summer’s anxiety, it is clear that we’ve let our communication slip.  So I’m writing a note to let you know we’re writing, and soon there should be more here, and ultimately a newsletter.  In the mean time, please feel free to pray that we’d make this happen in a coherent and timely manner, and that we’d get enough of the right things said.