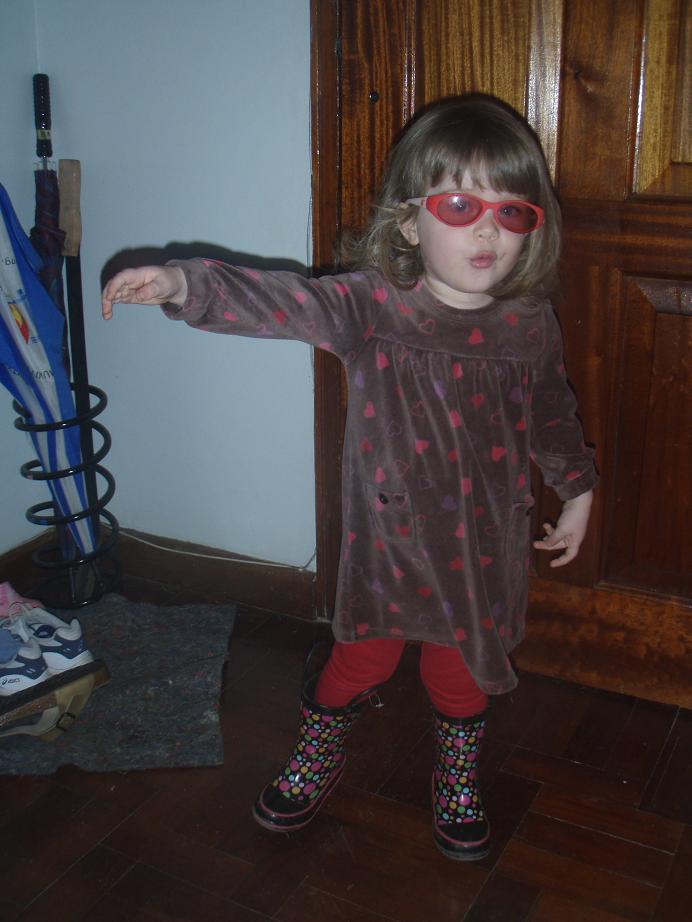 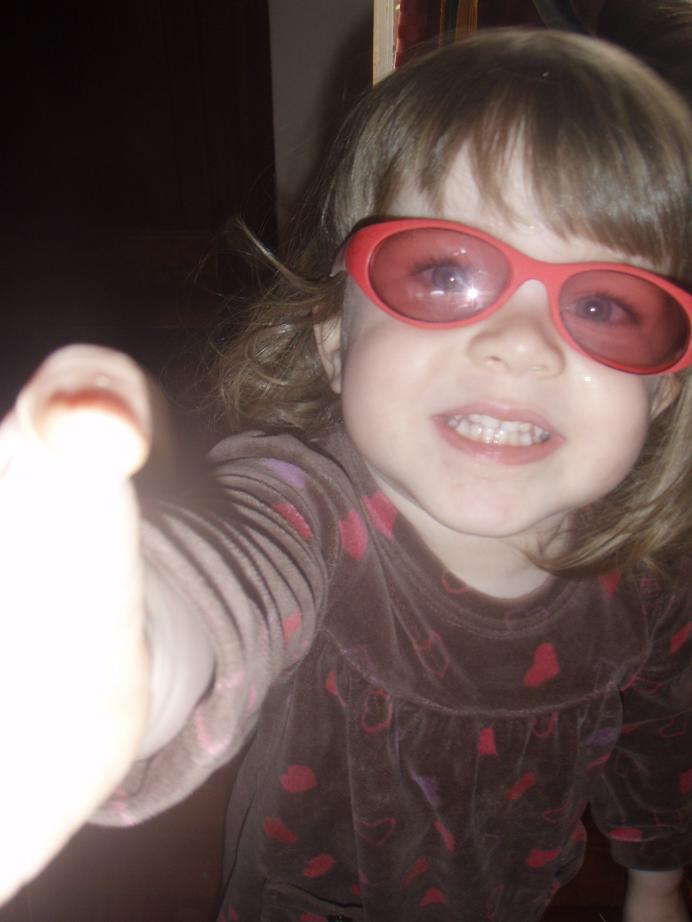 I had a hilarious picture of James at about 3 years old in the same
stance (with a bit less-matching clothes, if you can believe it),
but alas, I think it is in the one year of archived pictures we lost
somewhere in the last 8 moves… so you will have to take my word
for it, James and Anna have this in common: They LOVE to GO! Joel
and I, on the other hand, prefer to stay home if given the choice.

We have a school mascot that the boys named Hoppy. He has a photo album on our facebook page, but since some of you can’t access that I will post at least one picture here. Hoppy is really enjoying life in the tropics. Here you see him learning to climb bars with the boys (note the poinsettia tree and bamboo fence in the background): 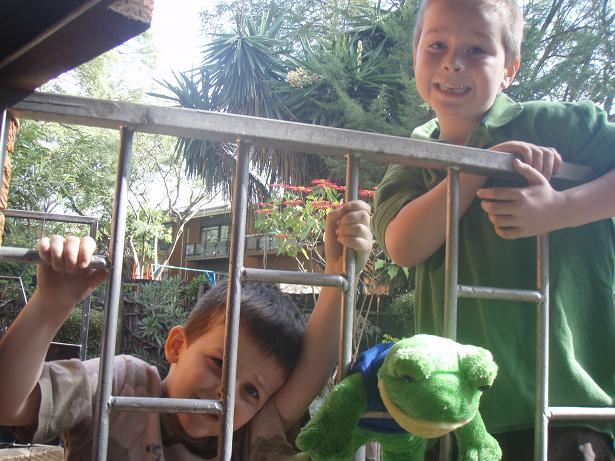 He has since discovered his long lost cousin Happy who lives back in Oregon. It’s a shame they didn’t have the opportunity to meet in frogness before we left, but they enjoy and rich long-distance amphibian friendship. Btw, pictures of Happy are also on Facebook. Sorry to be so exclusive, but posting things in multiple places on a limited internet connection is just unwise. The boys take turns putting him to rest for the night and make up fun adventures for him. They also get to read him stories from time to time. You may see him again… 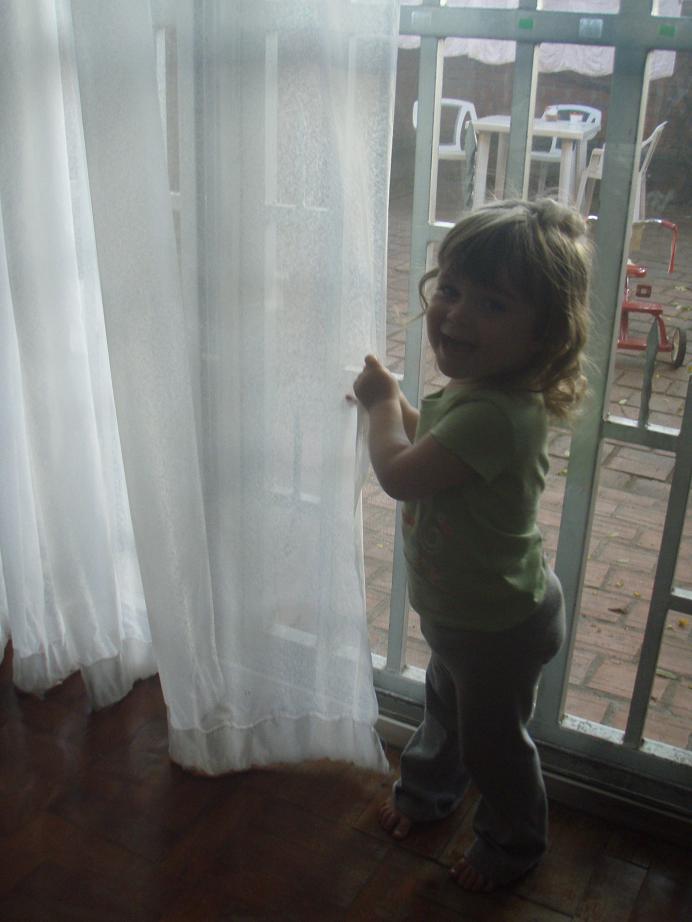 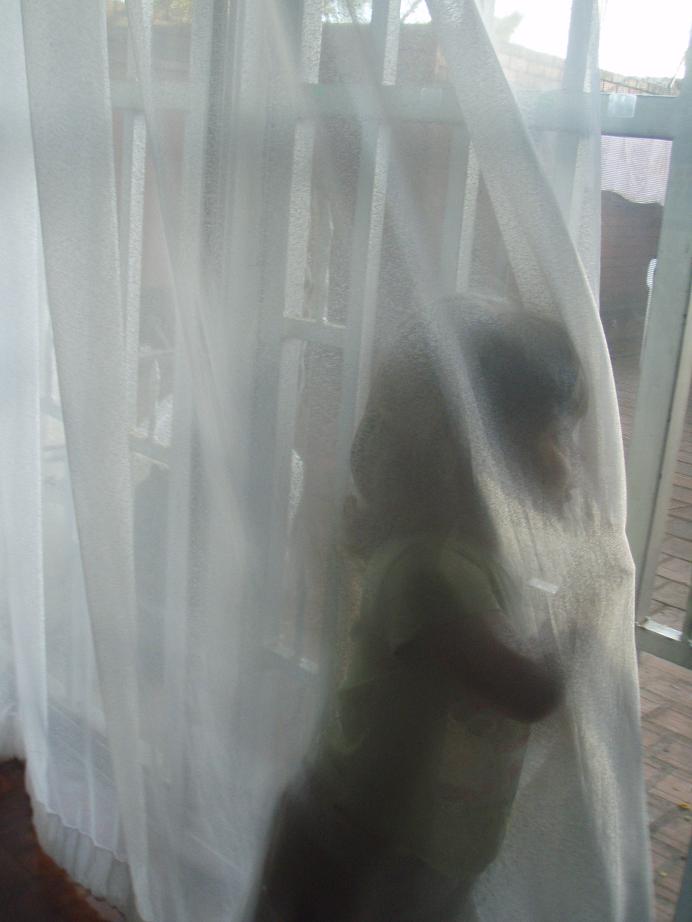 So much for ‘promising’ animal pictures. I am turning out to be wireless-network incapable in terms of getting those. They will come eventually. Sorry about that.

I will say to update on the ant situation that our house was ‘diagnosed’ with 3 kinds of ants in residence: sugar ants, safari ants, and termites. Here you might be able to see one example of the spaces they make in between floorboards to come out. This is a new hole, with only 50 or so sugar ants (a few safari ones which are a bit bigger/darker):

They were eating the underside of the floorboards in a couple places and coming up everywhere, so our landlord agreed to pay for extermination ASAP. Monday they mostly all died. It has been SO much more clean and peaceful since then! YAY!

Two of the most affordable ways to get in on the safari tourism around here are the AFEW Giraffe Centre and The Sheldrick Foundation’s Animal Orphanage. You can click on them to read more about their causes, which are fascinating to me. As you may have heard, our kids remembered and loved feeding the giraffe, so it was first on our list of things to do while we’re here. They set up this center to help fund a project to prevent the Rothschild Giraffe from extinction. I’m told they are famous for having no color below the knee, like they are wearing white socks! =)

[PICTURES POSTED NEXT I PROMISE!]

There are always warthogs running around eating up the crumbs dropped by the giraffe, (like a giraffe could reach…) I’m really not a warthog fan. I can’t seem to find anything remotely cute or interesting there, regardless of what Disney tries. What was God thinking when he fashioned the warthog?

The last few times we’ve been to the Giraffe Centre, there’s been one older female who loves to eat and is always hanging around licking tourist’s hands for pellets (though I’m told she will head-butt anyone coming by without the pellets, and her head is HUGE). Her name is Daisy. We learned that she’s 17 years old and pregnant! I’d be hungry too judging from the size of a baby giraffe – I think they’re born at about 6 feet tall! We could see in the distance 2 other new babies: a female only 1 month old walking around tentatively with Mom, and a male only 5 mos. old starting to eat from trees. Looks like the breeding is working fine and the Rothschild giraffe will still be around.

While we were busy snapping pictures of Joel shoving pellets into Daisy’s sticky gray tongue, Bernie, an 18 month old male came up and took a few handouts by sticking his tongue through the fence. The boys thought that was great. His coloring is quite a bit darker than the others because, the keeper explained, his father’s coloring is darker. As we drove out of the park, we saw who we assume to be his father (much darker coloring than the others) munching away on trees across the road from us!

Then we found our way through the maze of streets (essentially no signs, and certainly no maps) to the edge of the Nairobi National Game Park. Yes, there is a Game Park with wild animals that comes up to the city’s edge. There are fewer and fewer animals seen these days I hear. We went once a few years back and saw water buffalo, ostrich, baboons, monkeys and gazelle I think. Still a fun, though spendy excursion. On the edge there is a gate, again if you know where to look, that opens from 11-12am to allow tourists to come and see the baby elephants and sometimes a rhino that have been orphaned and are being successfully raised and re-introduced to the wild. Very exciting work. Sorry to say, poaching still happens. They have lots of good pictures and stories at the above website.

They have so many baby elephants now that they are split in two groups. The younger ones ranged from 5 mos-18 mos old. The second group was a bit older: 2-2 ½ years old. I could not believe how fast they drank about 3 gallons of soy milk – probably in less than one minute! The keepers explained that soy milk is as close as they can get, seeing as how it would be next to impossible to milk a wild elephant. Good point there. In each group as they travel around the wild together, they have keepers who help them throw dirt on their backs to keep bugs off (like a mama elephant would I guess), etc. How would you like to impersonate a mother elephant for a living? =) Then socially, one of the older females takes the dominant role as the leader and they are eventually released. Exciting really. Hot sun, crowds of people, and oncoming colds got the better of us and we left early. Oh my! It was still fun.

P.S. Friday we drove by the same area and saw a huge warthog on the loose. He was milling around by a bus stop. James laughed and said, “Who would let a warthog on a bus?! Not me!” =) Wish I had my camera for that one! 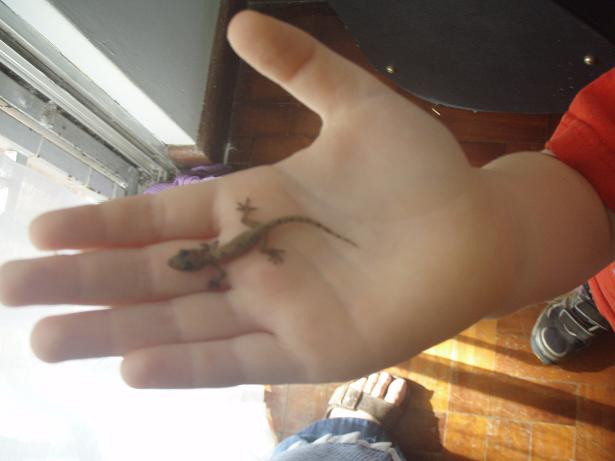 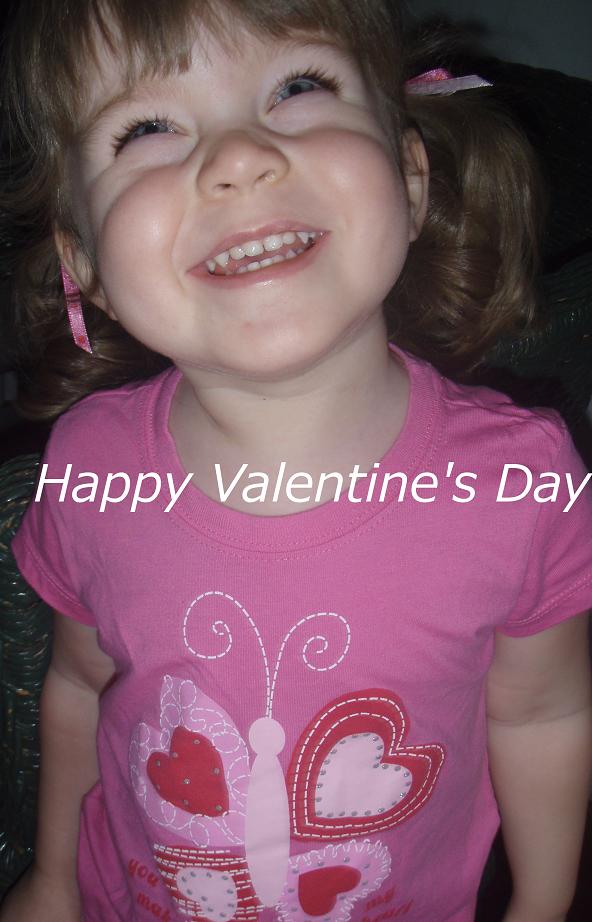 There is no way for me to convey the full experience of driving in a city such as this on a blog. I will do what I can. We have often compared the system of roads and rules between here and there as a dance. In the US we drive like a ballet – well-timed, organized, everyone in their spaces. Whereas driving here is more like a Latin lambada – not about rules, but emotion with competition for space and very fluid – every inch counts.

Anyway, it took me a year or more when we first moved to overcome my anxieties and learn to drive a stick-shift on the LEFT side of the road with potholes and no lines within inches of many other drivers. This time around it was shocking to change ‘dances’ so suddenly, but I was trying it out on Sunday mornings (least traffic of the week) again during our third week. This week I did most of the driving as Kent was still exhausted from his travels. On Saturday I missed an unmarked speed bump and took it at almost 30mph. Oops! We were all fine. After that Anna started saying, “Sorry!” every time we went over a speed bump. =)

Then on the way home on an unknown road, there was a small herd of cattle walking on the other side of the road (normal during dry season – where else do you find good green grass but in the city!?) when one sizable black and white one came charging across the road. I was going pretty fast, and hit the gas and swerved to get past her! I narrowly missed a charging heifer on the road – that’s a first! Kent started calling me ‘safari mama’! I guess I’m comfortable driving again.

Then Tues. morning I was late for the inter-mission Women’s Bible study across town (on Esther btw, very good) because the car was being washed when I arrived to pick it up. Anyway, I wasn’t rushing too badly, but wasn’t going to sit in a traffic jam either. 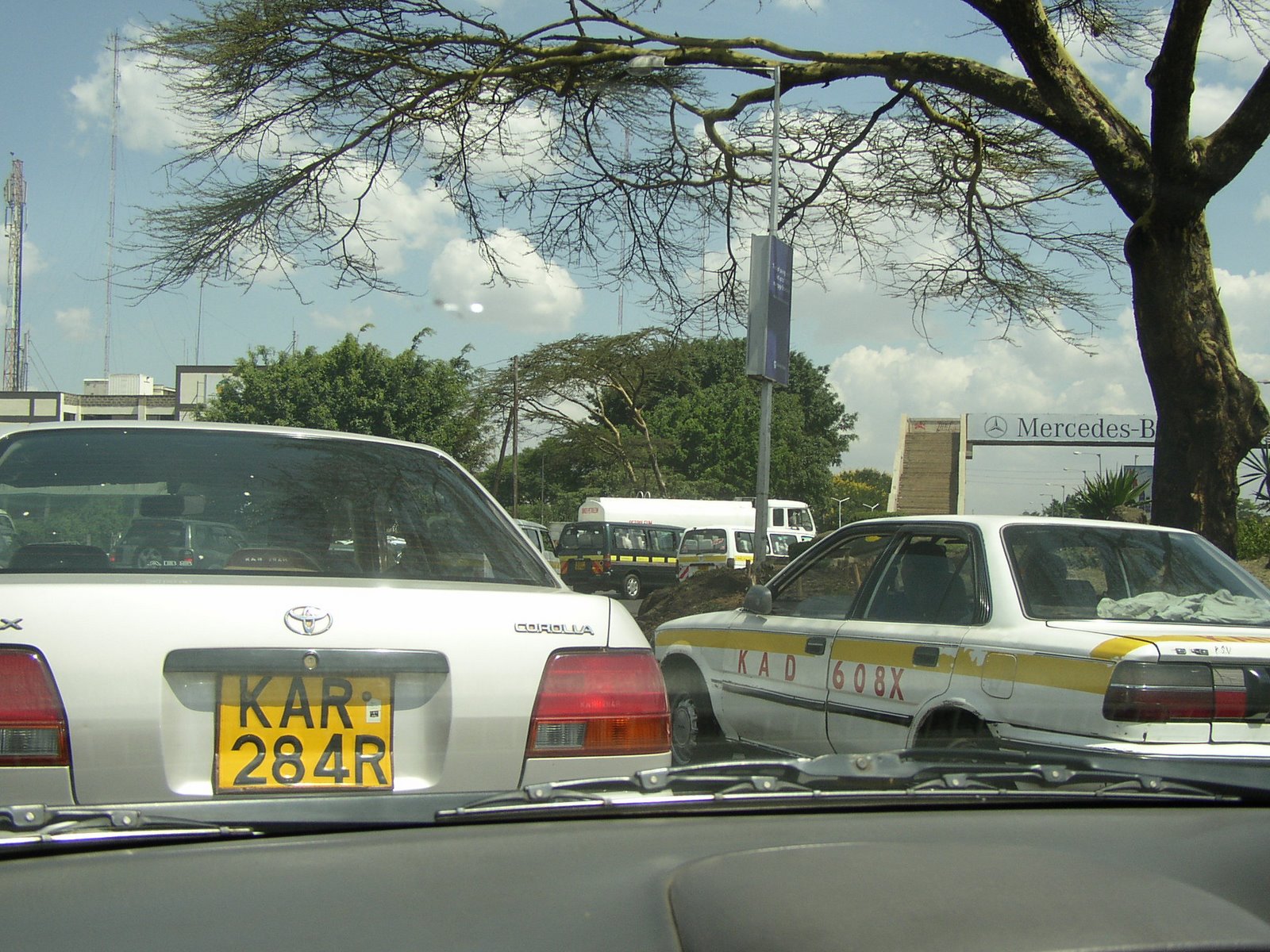 There are so many mini-buses (Toyota vans with 14 passengers that work like a bus system more or less) on the road that we’re very accustomed to someone driving in front of you and suddenly pulling off to the side of the road to pick up or drop off a passenger. Traffic flow continues whenever possible even if it means crossing into the oncoming lane. I was following a small truck closely and he suddenly pulled off to the side of the road. No problem. I’ll just pass him. As I swerved around him I had to slam on my brakes to avoid hitting a car full of policemen, lights flashing, sirens blaring, in my lane. Oops. I guess that’s why everyone pulled over so suddenly…


Thankfully they were in a hurry to get somewhere and just went around me and everyone continued merrily on their way. It took a few minutes for my heart rate to drop though. Hitting a car full of policemen – another first. So is it places like this that formed the phrase ‘driving me crazy’?