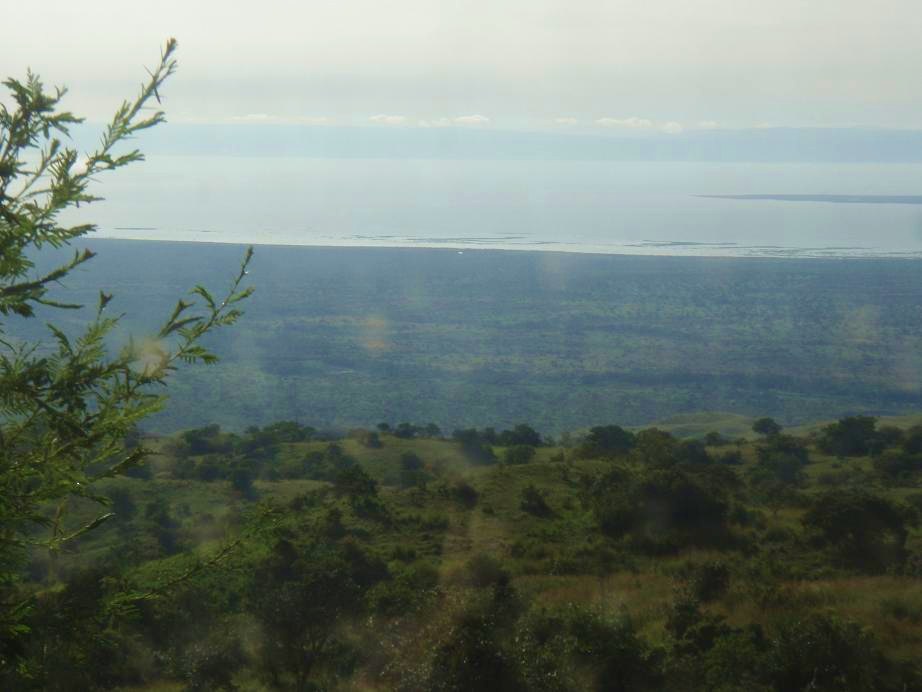 our first glimpse of Lake Albert 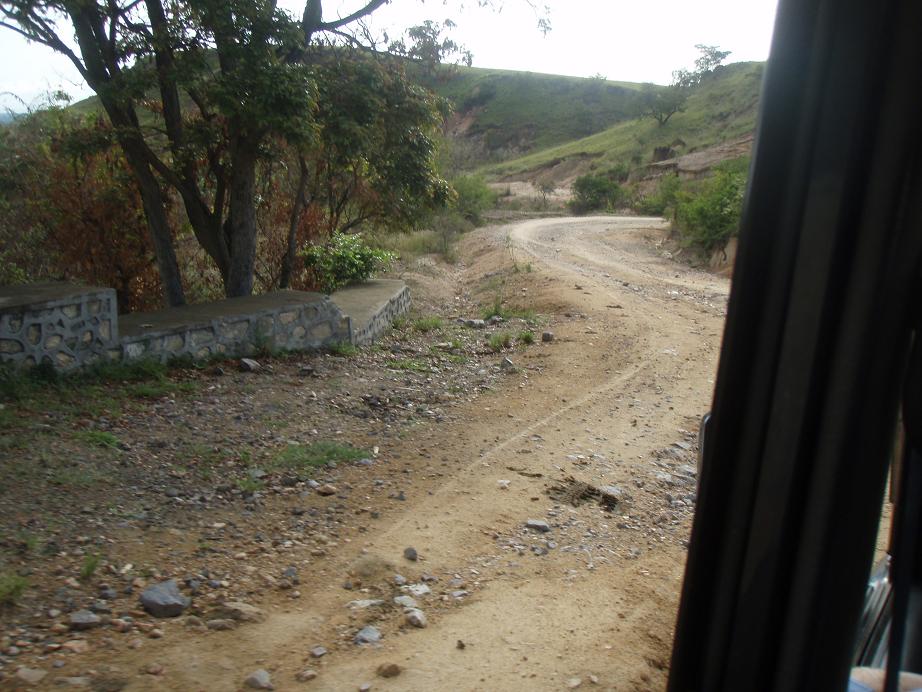 The road down the escarpment was steep…

…and the flatlands near the lake were pretty muddy! 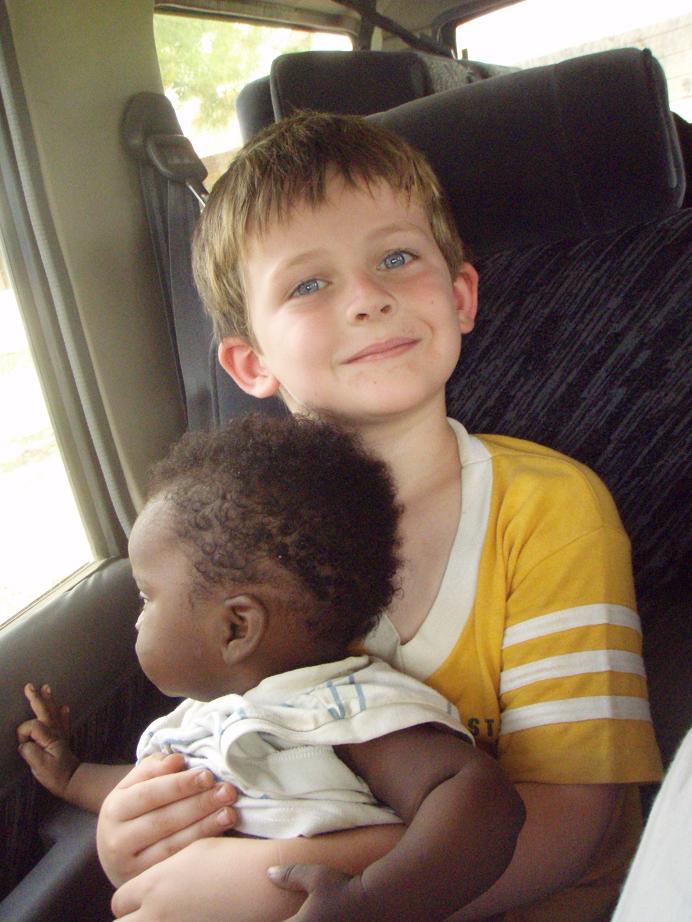 Waiting for our paperwork to get processed, many people gathered around to see the ‘white kids’. One mother even passed her baby in the window to sit a few minutes on Joel’s lap. Our guide told us if the kids shook our hand, they would refuse to wash it all day long… 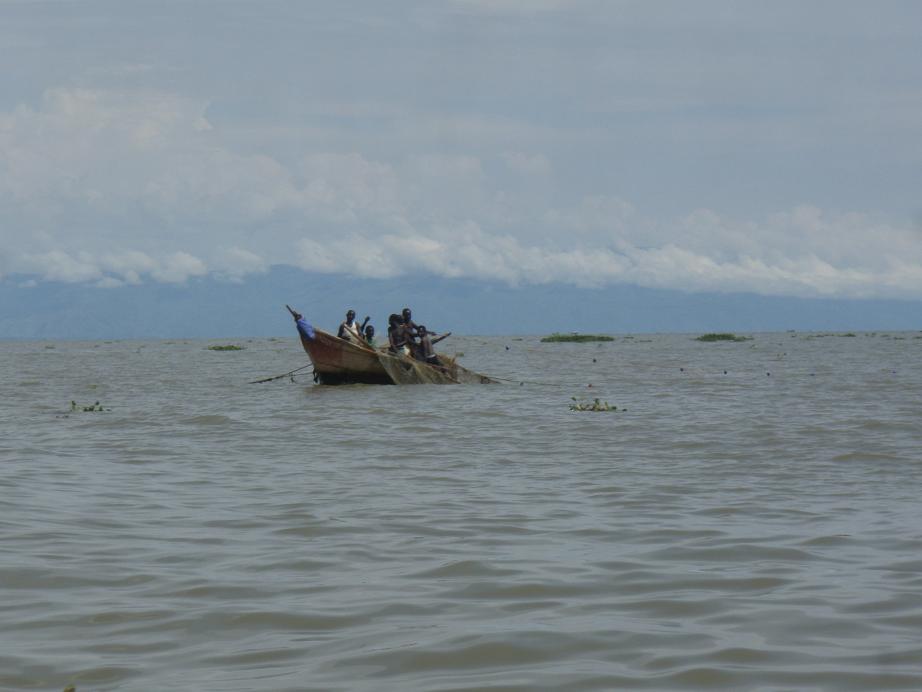 In the boat. Seeing fishermen pull in their nets. 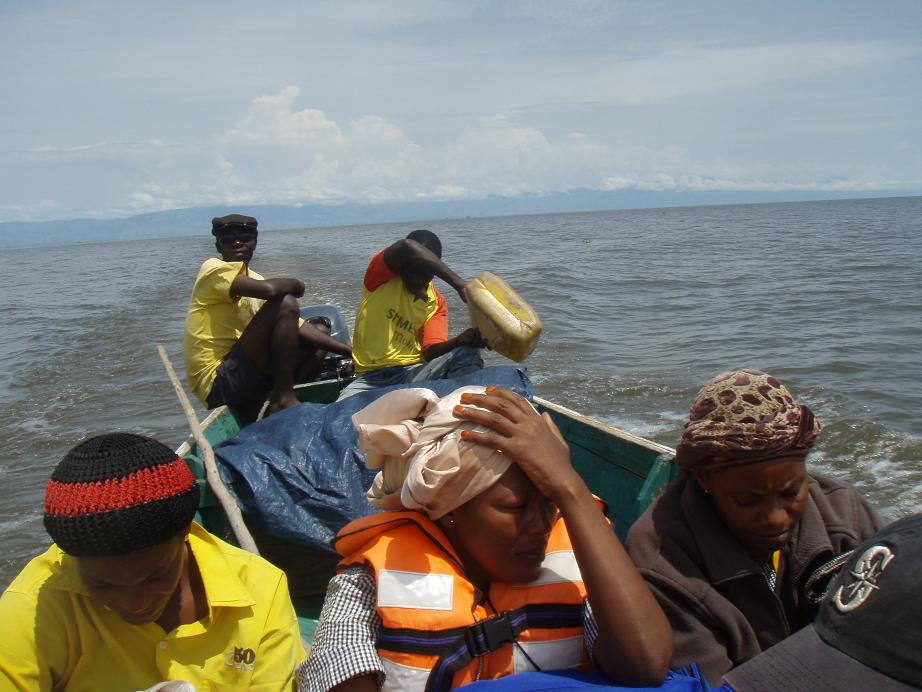 He’s not hiding from the camera, just bailing some water… 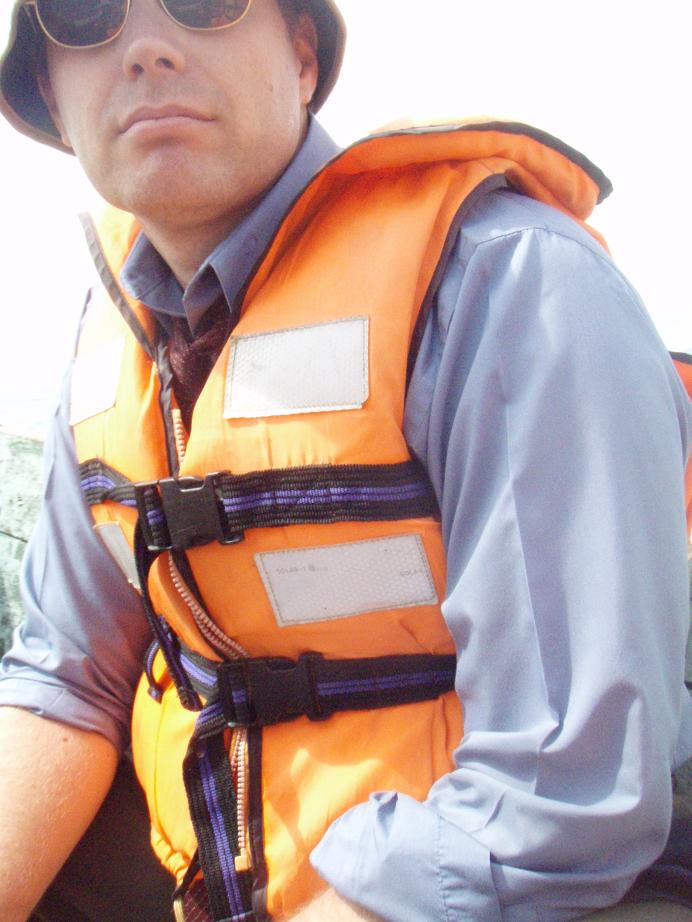 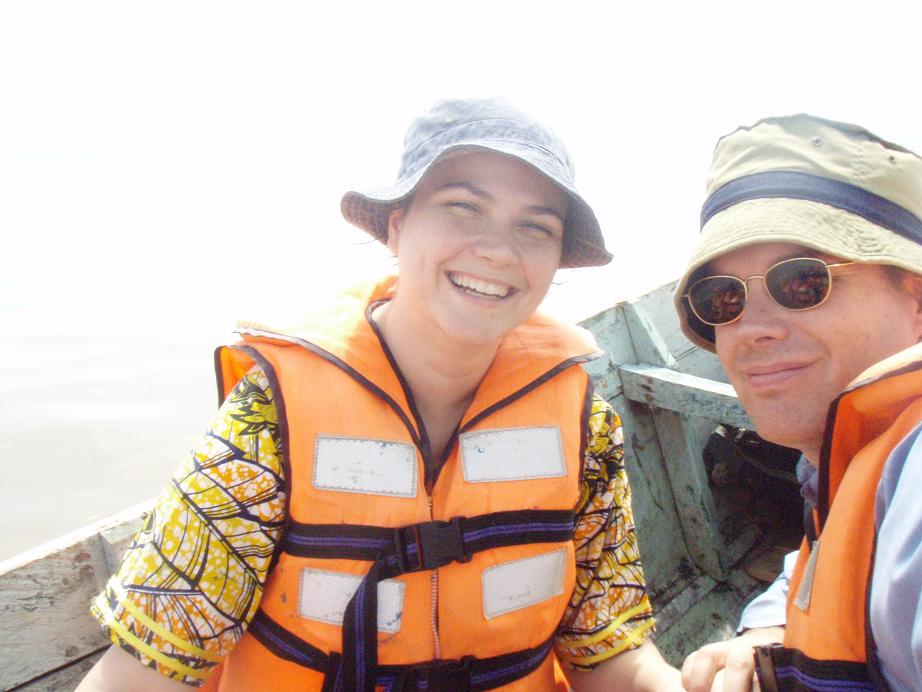 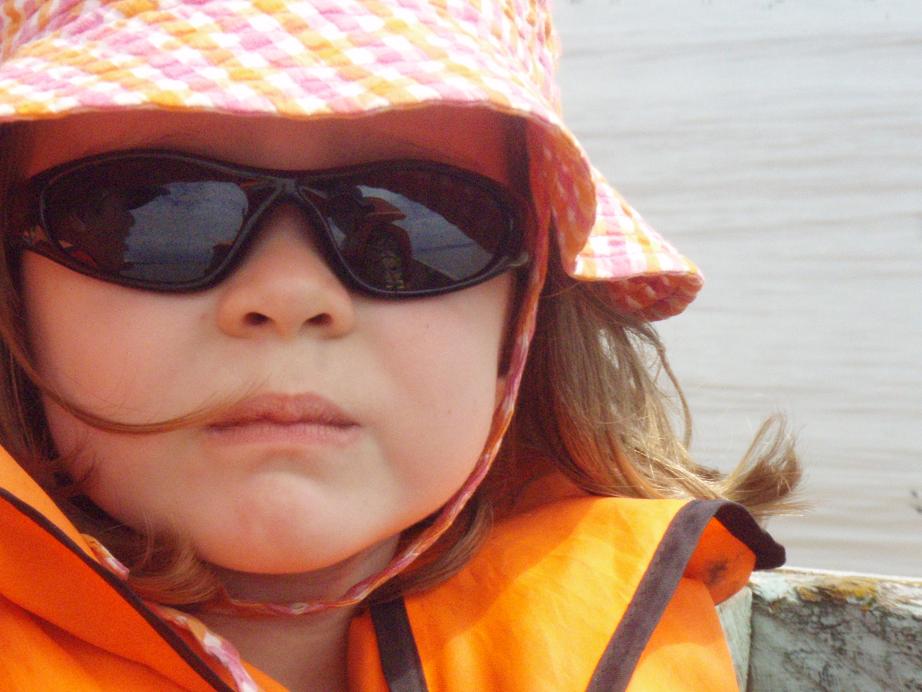 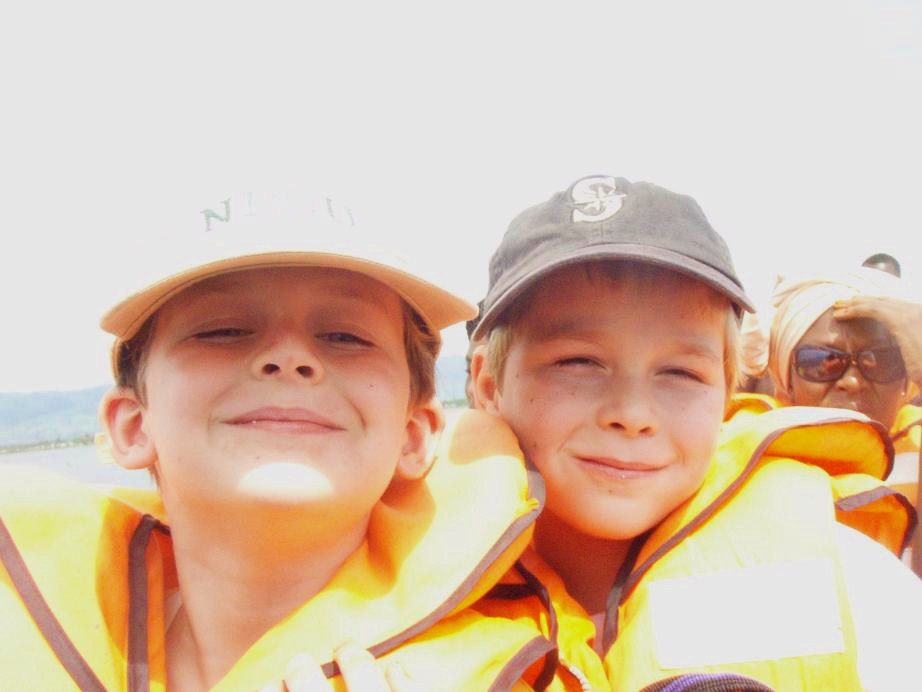 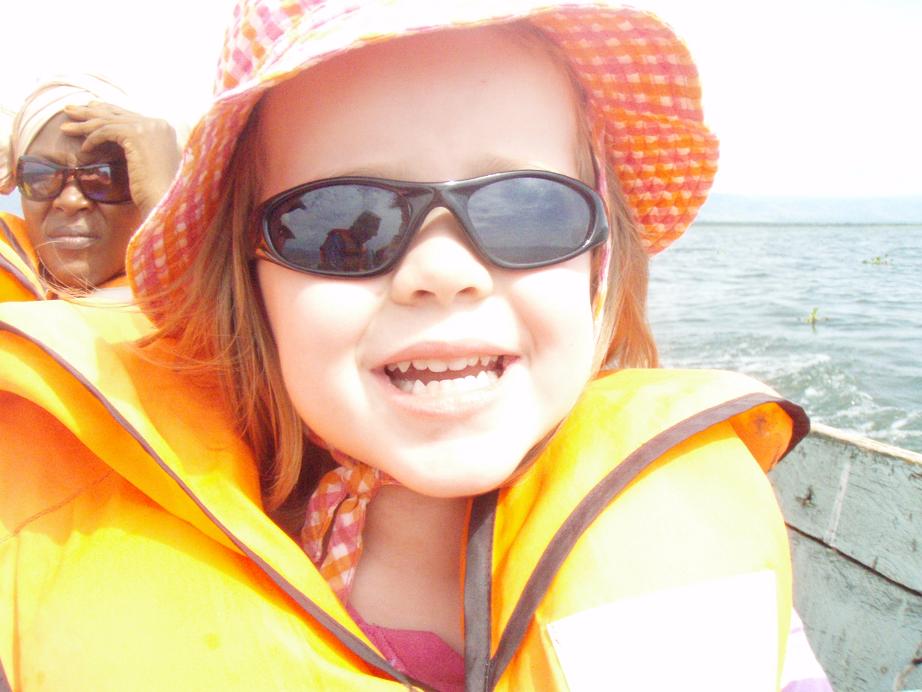 …gotta love all the faces!
(Thank you Rachel for the sunglasses!) 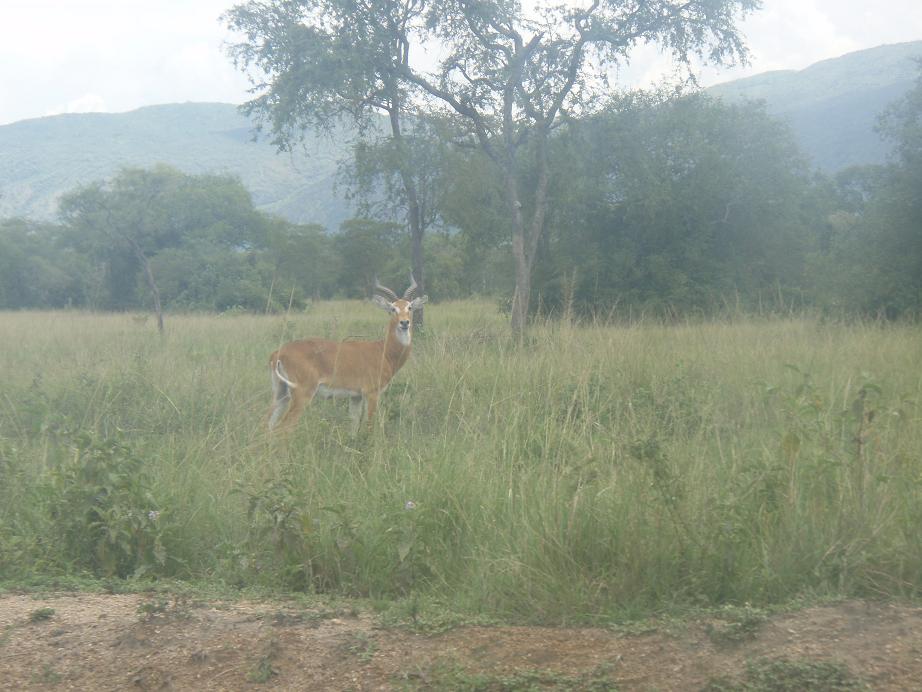 We love our little water proof camera, but it got a little fogged up over the lake.
You can probably still see this guy having lunch right by the road! 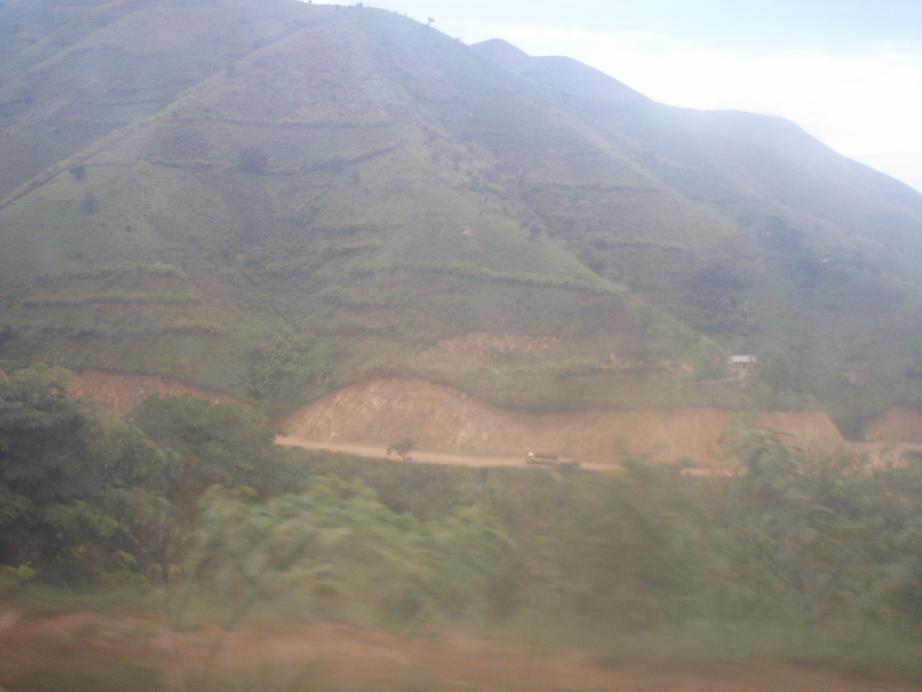 Winding up through the Ruwenzori mountains! 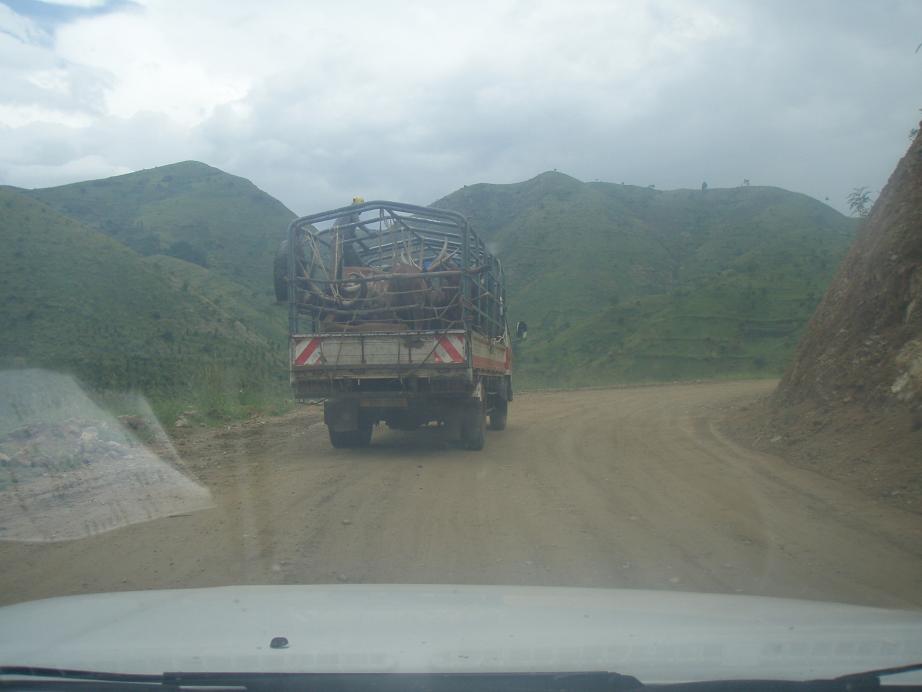 This was taken minutes before my first time … how to say this… Let’s just say the cow in that back right corner didn’t make it to the pit stop and we needed our windshield wipers for much more than rain.

It was long, but worth it with this waiting on the other end: 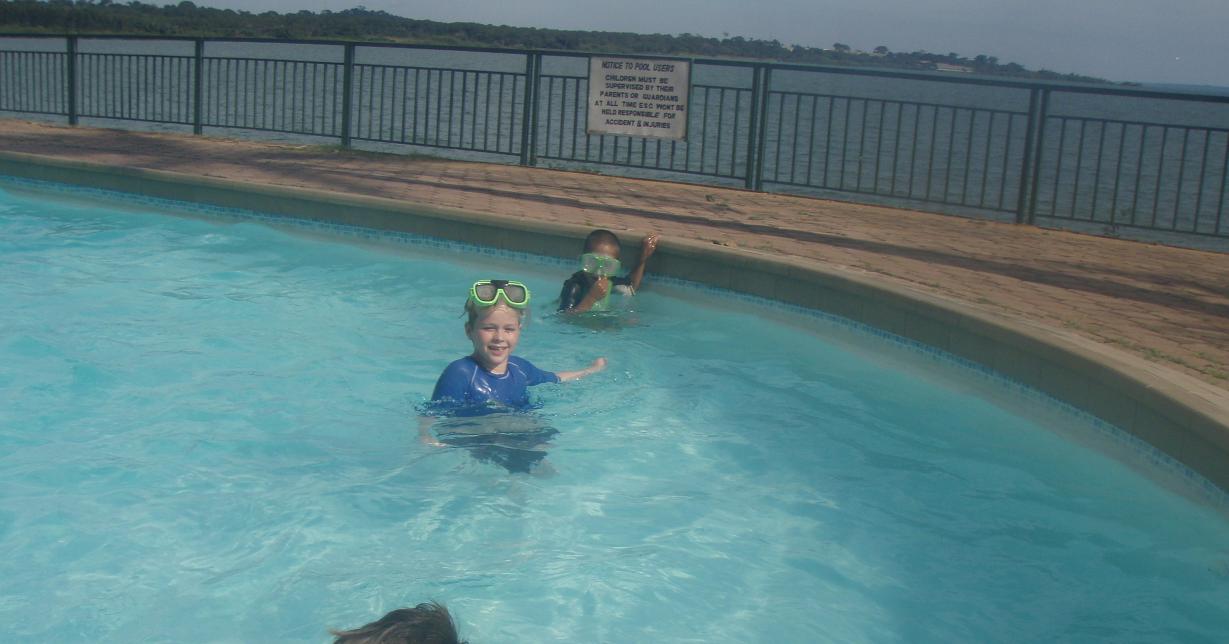 swimming with friends on the shore of Lake Victoria… 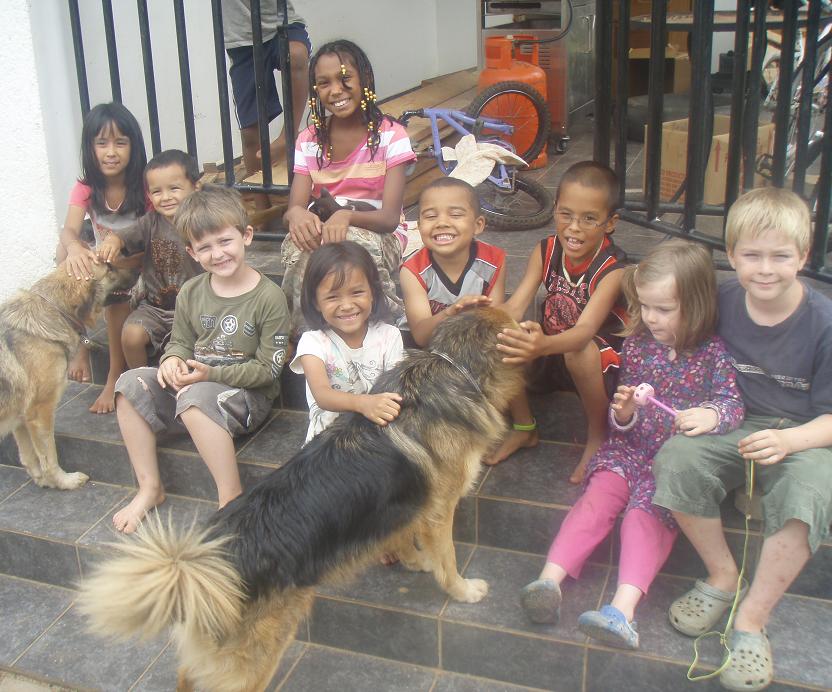 playing, eating, sleeping and playing and eating and sleeping.
(Thank you Menda for everything!)
A great time was had by all!
Our trip across Lake Albert was very enjoyable.
It’s a fascinating place!
Sorry – no hippos in sight…

Here’s the play-by-play:
The first leg of the trip was in a car with a cousin of a friend who is also the head of a local NGO. He was wonderful to talk to! He has so many interesting ideas about why things fail here and how to help them change. We really enjoyed the ride into his hometown, meeting some of his friends, and hearing about his work to help the physically disabled people in this region gain tools and experience to live well in their own homes with their own families. Right where they are. Working with what they have. Instead of lamenting and importing what feels lacking.

He drove us to a private beach location where we transferred bags from car to boat, used the outhouse and gooped up on sunscreen. We had hoped to ‘set sail’ (it was really a motorboat) before the sun got hot, but we ended up embarking at 10:30am with the sun already heating up. The cool wind made the trip gorgeous! The water was somewhat warm, we all buckled up in our deluxe life jackets complete with reflectors and whistles. The kids, of course, had to try out the emergency whistles… Yep, they work!

There were three people sitting across the boat and three benches to sit on. Kent and I sat on the first one, then the three kiddos in the middle and three local ladies behind them. In the middle of the trip I could understand the ladies were debating about which of our boys was the eldest or whether they were twins. I cleared up their misconceptions and shared our gingersnaps. What else could I do? Joel had just reached in the water and accidentally soaked one of them with his splashing.

Anna was hysterical when she sat down and felt the boat rocking. She was inconsolable until allowed to grip my hand with white knuckles. Once the motor started and we had wind and a view she shouted nervously, “I love this!!” You will get a kick out of the pictures we took of her in her sunhat, shades and life jacket gripping my hand for dear life. The boys are seasoned travelers by now I guess. They seemed nervous the days before, but were excellent and confident when we got to the boat. We all had fun spotting different water foul. We tried not to be concerned that the ‘copilot’ of the outboard motor was occasionally bailing water. What could I expect from a handmade boat? I knew we were in the best possible hands and left it at that.

We lost an hour somewhere in the middle of the lake and it became high noon. Amazing that all that warm water will travel north to Sudan, Ethiopia and Egypt!

I’ve never seen a lake that had bits of floating vegetation everywhere. Lots of lily pad-like things. And the occasional pretty purple flowers. Fun to see all the dugout fishing boats too. Up to this point our trip was really glorious (not only because we always travel better in the mornings). I shouted over to Kent, “People pay big money to go boating on a day like this!” I felt like a yuppi crossing Lake Washington. Our 2-hour tour across the southern tip of the lake only took 1hour, 40 minutes and there was little wind to splash us. The country we were entering is, generally, much more organized and wealthier, so I mistakenly assumed it was clear sailing from here on out…

First of all, when we beached the dugout boat… yes, I say ‘beached’ because we got in at a ‘real dock’ and now landed in a lily pad marsh on a patch of sand… there were no signs or buildings. There were a couple of enormous trucks (lorries) full of bottled water and other goods for transit and eventual sale getting loaded one man at a time into a much bigger transport boat. They were handmade boats the size of a city bus, and couldn’t get very close to shore. So laborers were hired to cart 2-3 boxes of goods on their heads from the back of the trucks into the warm lakewater chest deep where someone would drag them onto the boats. Quite an interesting sight really.

Anyway, once we were beached, the only way out involved a foot or two of lakewater and lilypads. No big deal in your swimsuit among friends, but disconcerting with 3 kids, 6 suitcases and 30 strangers. Some of the laborers came right over to lift us out. That didn’t look like a good option to me. One of the local ladies told them “Hakuna pesa” (no money) over and over, so I assumed this hauling of people was a paid position. Kent climbed over the suitcases and was able to jump to the sand more or less. James and Joel followed. One of the kind ladies lifted Anna over there (who resumed her freaking out now that my hand was not attached to hers anymore), and there I stood in the boat gently rocking in the lapping waves.

So I did what I have seen my courageous mother do many times, rolled up my sleeves (pants in my case) and jumped in with both feet! =) It felt nice on my feet actually. I tossed my shoes to dry land first. I think I shocked those 30 strangers. Unfortunately, the immigration process waiting for us had nothing better to do all day and took a long time and was not friendly in the least. But soon enough we were piled in a taxi sedan and driving toward our destination. We were by this time about 2 hours later than we wanted to be.

Our route took us through a portion of game park, or wildlife preserve. It was fun hearing the driver’s stories about seeing the lions sleeping on the road at night. We saw gazelle and other deer-like thing in abundance. I would want to live here if I was a lion too! But we didn’t see him with our own eyes. Just his meal for tomorrow. We also saw a mother warthog with her babies next to the road. The car drew closer and she just took off, leaving them to fend for themselves! What a mom.

We wound our way through the Ruwenzori Mountains, which reminded me a bit of the foothills of the Cascades and more closely the mountains in northwestern Cameroon. People would work the land at a 60 or 70 degree angle, which amazes me! Lush green hills with wide dusty dirt tracks sliced through steep valleys. It was beautiful!! There were even a species of evergreen – in the tropics! Apparently, these mountains do actually get snow occasionally in April. Who knew?

We arrived to meet our bus connection to find that it had just left. Our options were staying the night and waiting a day, hopping a small van taxi or hiring our current driver to continue on. We opted for the last option after a quick stop to buy more water at a real grocery store! Pavement and grocery stores – civilization itself!

Alfred the taximan was nice. Kent and the kids sacked out for a nap in the back and he and I discussed life in the front seat as we drove. There are few drivers I am comfortable with as a front-seat passenger, but Alfred was good! He knew the roads well and that helps immensely. He knew when we would see road construction and truck after truck rolled by with Chinese sprawled across the front. He knew when to gun it and make up the time. He was careful with his car and I appreciated it.

It took us a long time. It was a long afternoon. We didn’t pull into town until well after dark, just in time for rush hour traffic! And he didn’t know the unlit roads well in the city. I began to pray that God would somehow guide us there without even ONE wrong turn as it was really late for the kids. We called our friends for directions as we neared their house. We couldn’t find the Total gas station they referred to, but decided to pull off the road a bit to get better directions. As it turns out, the road we were sitting on was the very one we needed! We found their house and minutes later were chowing down homemade lasagna and taking hot showers! Not one wrong turn!!

Driving ourselves last time took about 16 hours, which for us is best spread over two days. This time with the boat over the lake we were hoping would take only 12 hours. We ended up taking 14, but were really slowed down by the whole missing-the-bus decision. Anyway, we are glad to have done it at least once! I probably still prefer the airplanes in 68 minutes or less to be honest. And I won’t say I’m sorry we didn’t see any hippos or crocodiles. I didn’t really want to anyway. We waved to them all the same!

Pictures will come once my better half returns in the camera cord! =)