Last week in Re|engage, we talked about Love, and how God defines it in the Bible. One thing we looked at was 1 John 4:7-21; my map of the passage follows: 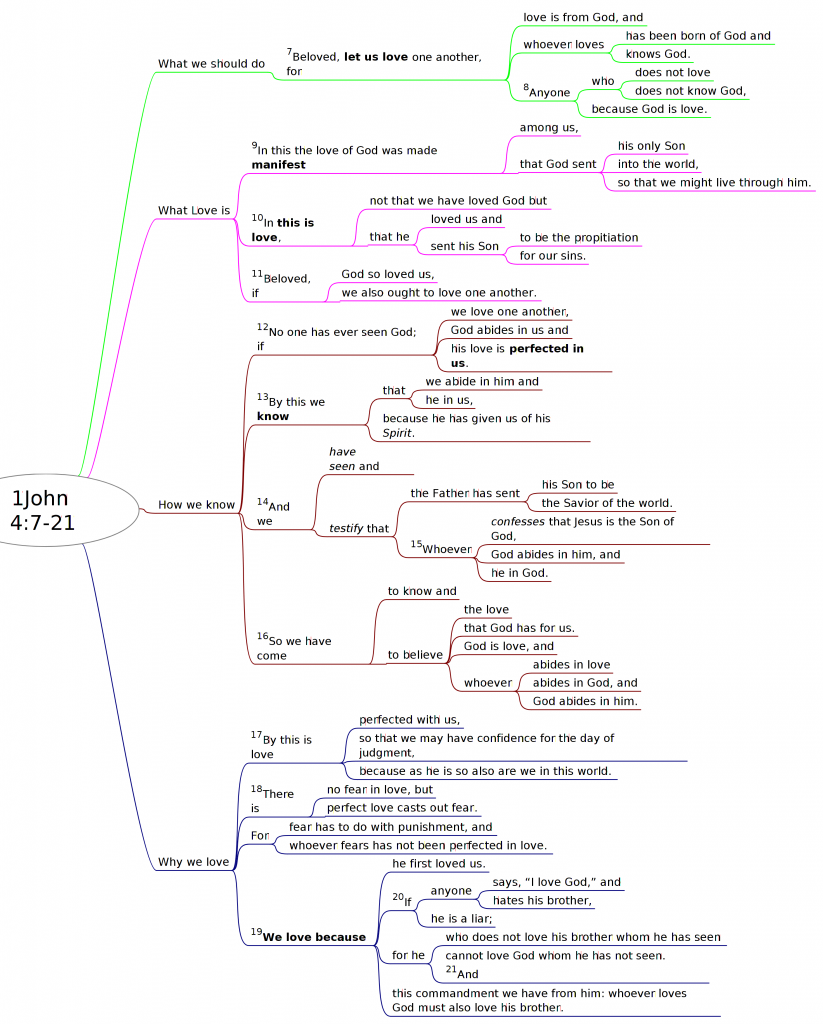 This is another passage I’ve seen many times before, but I was struck by the beauty of how it is all put together. There is an encouragement, a definition, an impact, and a rationale. Or, we should love, this is what that means, this is what will happen if we do, and this is why we do.

Rather than base our ideas of love on Hollywood (or Bollywood, as the case may be), we see that Love comes from and is defined by God, and finds it’s pinnacle in Jesus’ incarnation and propitiatory death on the cross for our sins. If we love like that, it will be evident that God is working in us, since otherwise that kind of love is impossible. The more God’s love shines through us, the more God gets the glory for any good we do,  and the more confidence (and less fear) as we consider facing God at the end of our days. Loving our tangible, physically present brother right now is practice for the love we claim to have for the God who is unseen –yet eternal (2 Corinthians 4:18). 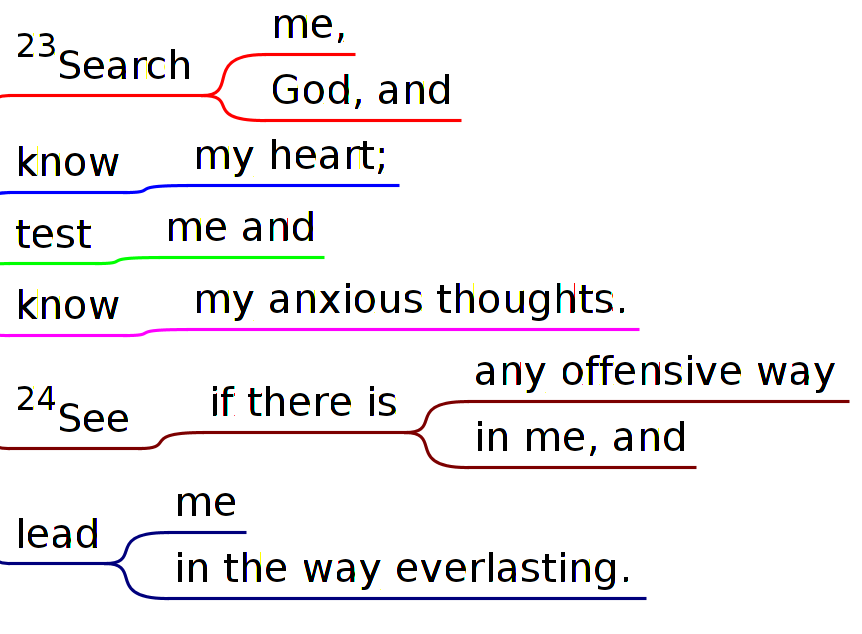 This is a pair of verses we were encouraged to meditate on for this week’s Re|engage class. I’ve seen these verses many times before, and even had a class based on them once, called “Search”. But even there I didn’t get this as an honest attempt to see our own sin for what it is.

One of the principles of the Re|engage class is to work on the issues we bring to the table as individuals, rather than focusing our effort on our spouse’s problems. We call it drawing a circle around ourselves, and working on everyone inside the circle. In light of this principle, I found these verses opened up new meaning. In two verses, David mentions me/my six times. He’s not asking God to show him the problem with his (many) wives. He’s not asking Him to show him what’s wrong with all the other people he comes in contact with. David knows he has sin, and he’s asking God to root it out.

But this isn’t the cold sharp knife of the impersonal surgeon; David twice asks god to know him, specifically his heart and his anxious thoughts. Do we not have those? It seems I can’t talk to someone five minutes these days without running into some kind of anxiety. Which may not be a question obvious sin; it may be a result of abuse or some other kind of brokenness. But still, we need our anxieties to be known, and to know that we will be OK despite them.

But ultimately Jesus does oppose anxiety with faith, so it is instructive that David doesn’t pose the possibility that he has anxious thoughts; he outright admits them. This from the King of Israel, the man after God’s own heart?

But sometimes we really aren’t sure what we have or haven’t done. Sometimes we need to pray with David, that God would see if, and that we would be covered either way. Sometimes I sit and argue (either with myself or with my wife) about whether something is my fault, and ultimately realize that it would take less time and energy to simply admit that I don’t know, but that I may well be wrong. Why am I so concerned to not admit (even the possibility of) fault, that I would tire myself out by continuing the debate? Admit sin, and trust Jesus to cover it. Otherwise, we run the risk of calling God a liar (1Jn 1:10).

The final thing I get out of this verse is that David doesn’t see knowing sin, however gently, as the end of the story. After he asks God to search/know/test/see him, he then asks Him to lead him. God is not just seeing our sin, but he is leading us out of it. This was the crux of the great shift in how Martin Luther saw “the righteousness of God” in Romans 3:21. He had been thinking of it as the power and holiness by which God sees sin and punishes sinners. But he ultimately realized it was about what God provides for us in Jesus: “the righteousness of God through faith in Jesus Christ for all who believe.” (Rom 3:22a) So for those of us to who see our sin, and trust Jesus to save us from it and its consequences, he will lead us in the way everlasting.