“God's glory is so great that it is impossible for only one human
culture to adequately display it.” – T. AVERY 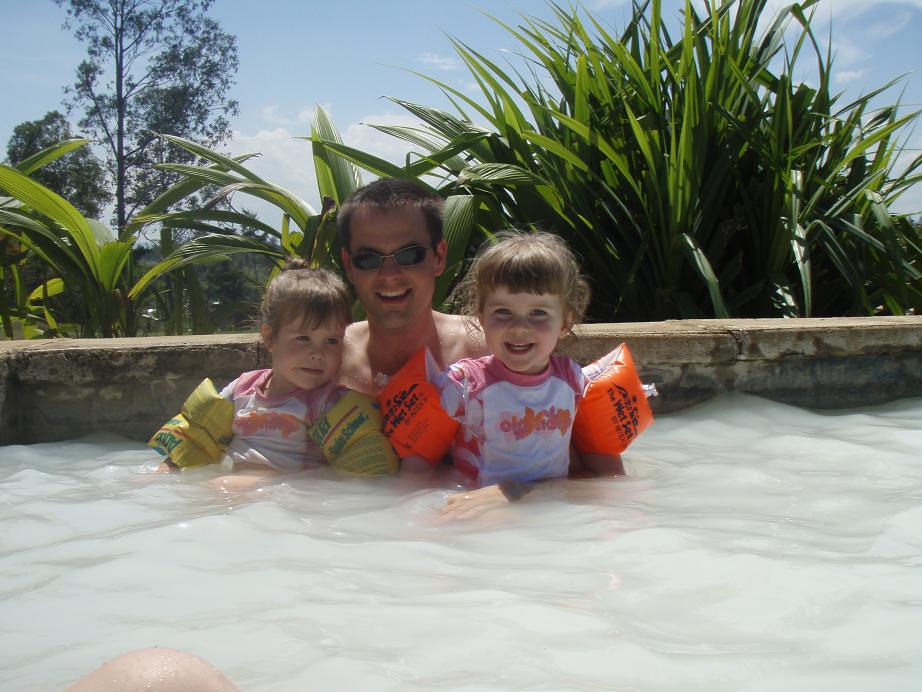 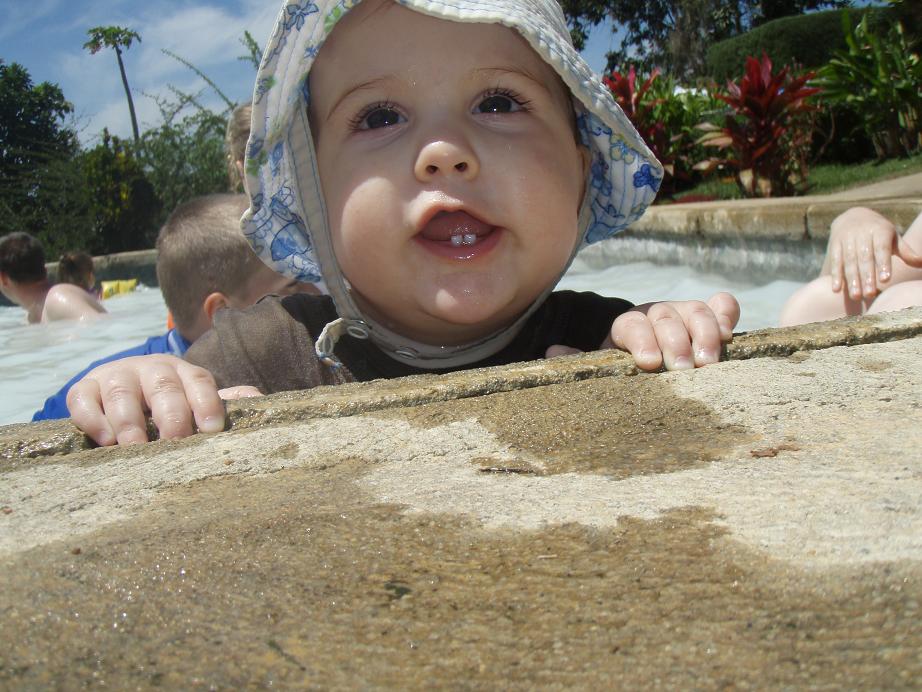 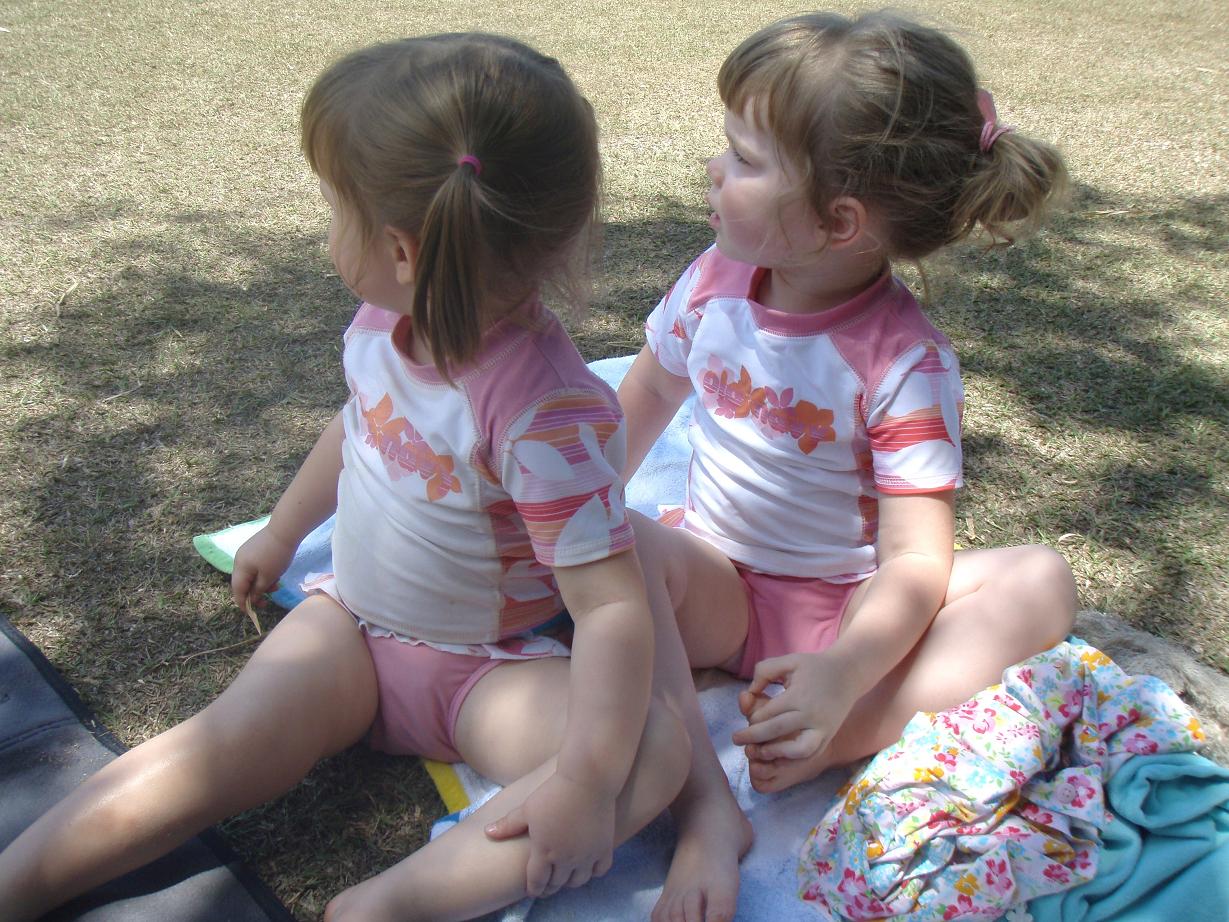 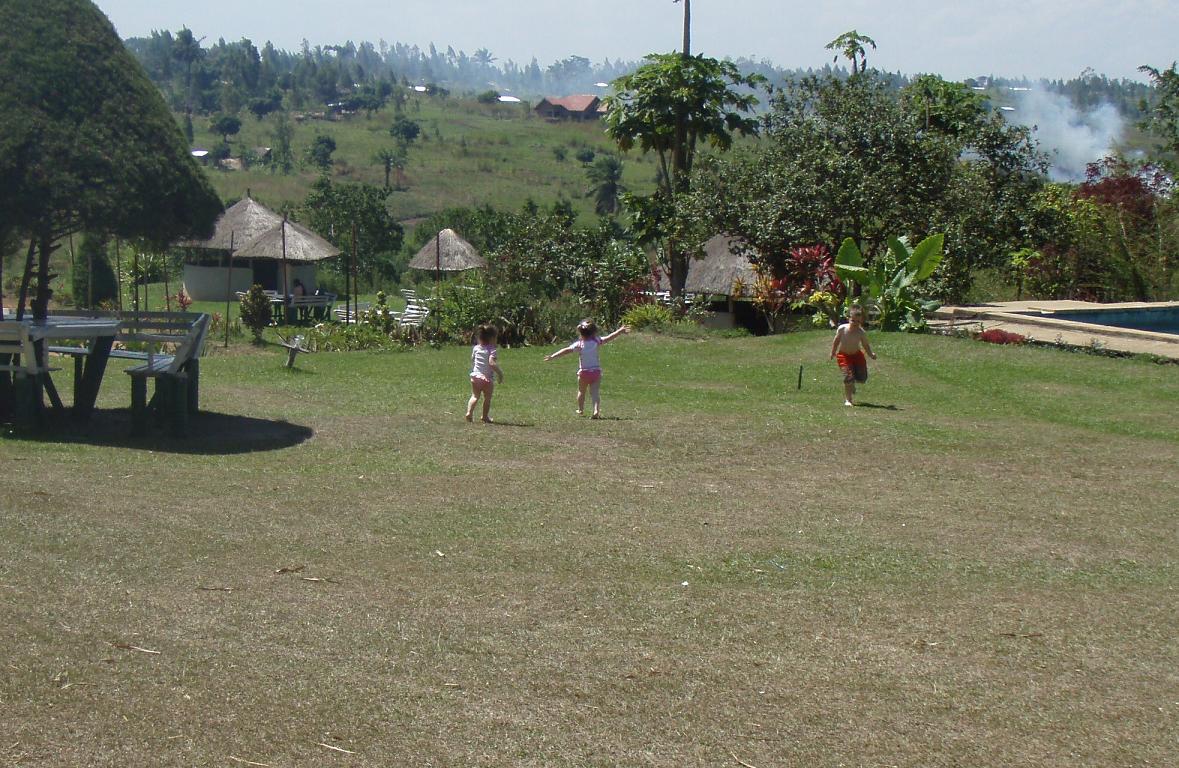 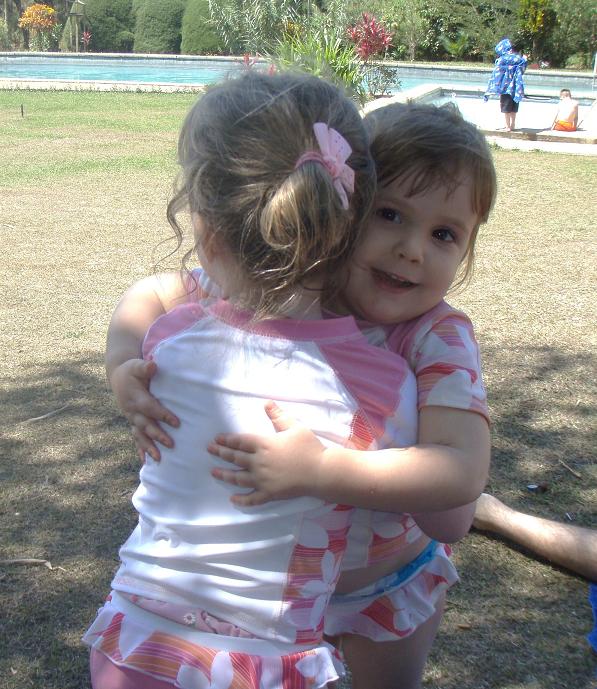 I bought Anna future sizes, and she's outgrown the 2T, but it still
fits Brooke, so they looked like twins! Don't ask why the kiddie
pool is white. It still smells like chlorine… =)

It’s that time of year when classes hold their parties and field trips. After 30 weeks of grueling educational hoops, we will put down our pencils for a while and take a break. Well, our family has only just begun the educational journey. This week marked our last week of school, for the first year of many. It is the end of the beginning. James ‘graduated’ from kindergarten reading well and adding and subtracting. Here he poses with his final math test on our back porch. 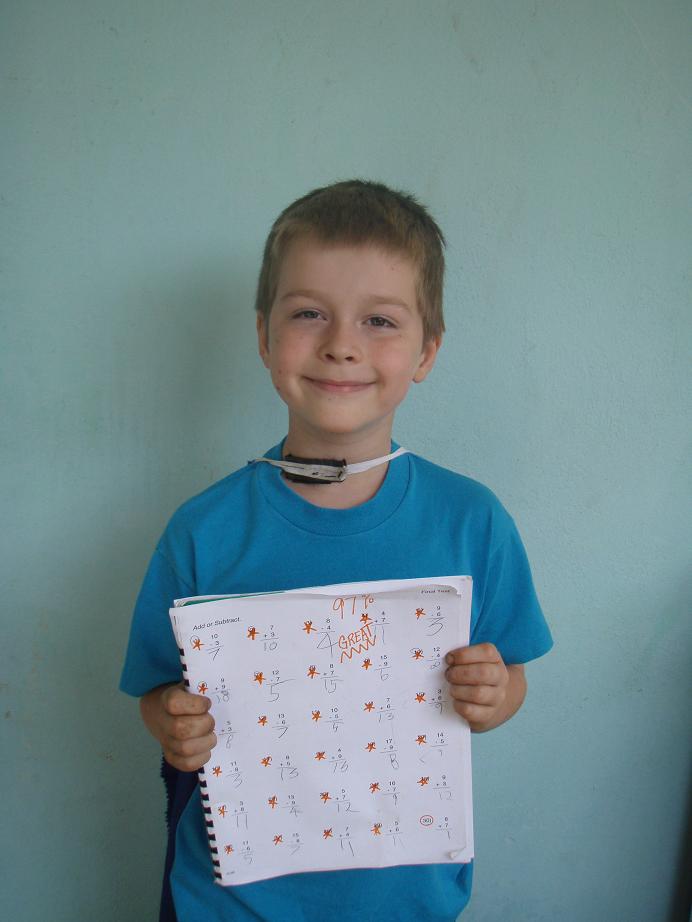 The Rooks family may recognize the blue shirt. =) No, he is not wearing a cap and gown (do they really need those after kindergarten!?), but he is wearing his Superman cape. Maybe that’s how he got a 97% on his test! =) He missed the last problem by subtracting instead of adding. Oops. This is technically a first grade math book, and he is almost old enough to be finishing first grade, but I’m in no rush to see him out the door to college, so he’s doing some first grade work during ‘kindergarten’. My brainy kid.

Joel, whom I had previously pegged as a musician or jock, has totally shocked me this year by soaking up math facts and phonics! He is quite kinesthetic and must move, which I was nervous about teaching. But we figured out a system:
Write your name. Run to the end of the hall and back. Finish your math page. Do 2 laps around the house. Etc. Works pretty well for this renaissance preschooler. After I threw my stereotypes out the window I took a picture of him with his little certificate. This is the end of preschool for Joel (he just finished the kindergarten math book) and did not feel like smiling. 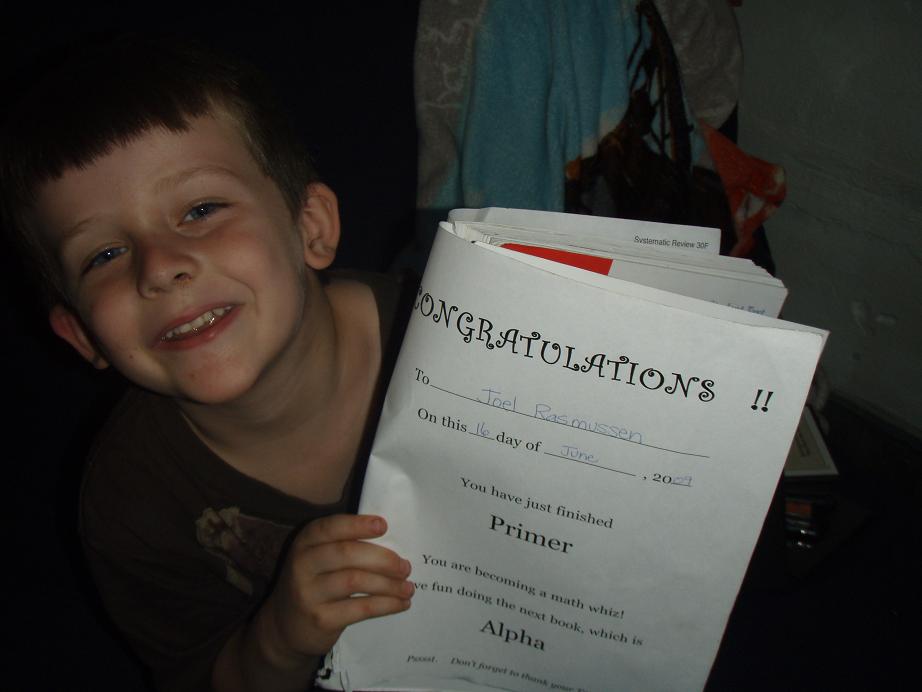 And James earned a certificate too! We all laughed at the last caption on the page, “Psst. Don’t forget to thank your teacher!” They did. 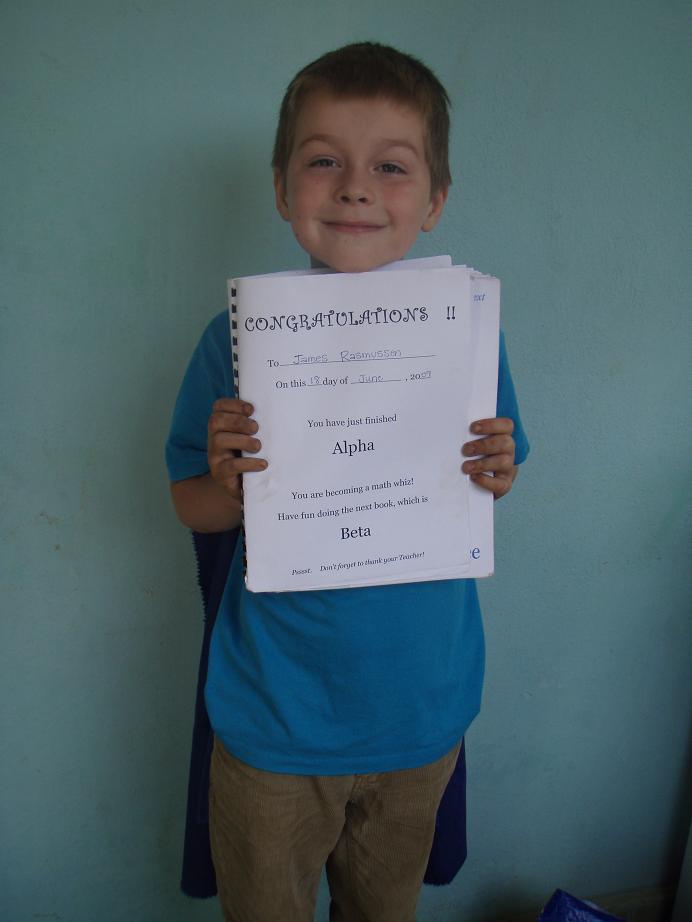 And Anna, of course, survived our first year homeschooling too. She really wants to ‘do school’ and adores coloring (especially if the color PINK is involved!) but has started to sing ABCs and count to 10. She’s currently going through a ‘hoarding’ phase and insists on carrying 3-7 items around at all times. 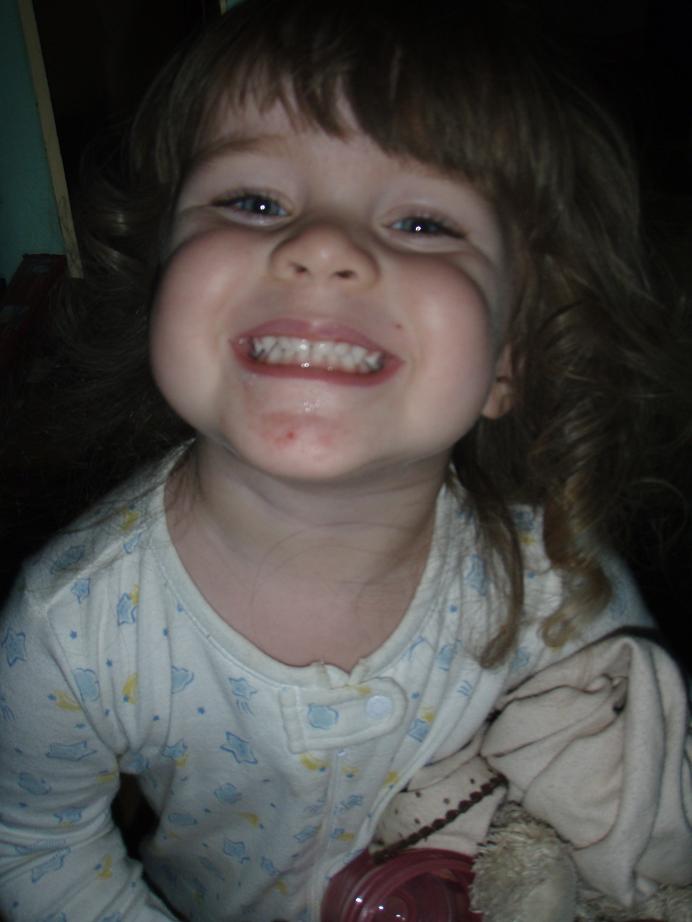 God has been particularly gracious this year as we spent our first year of ‘real school’ in 3 different countries. There were SO many weeks where we were either packing or unpacking and I thought we’d never get through! The kids still don’t have their own desks built for next year, but that’s what August is for, right? I now know that I really CAN do this homeschooling thing! At least for few years… YAY! We made it! Now for a field trip to the pool! 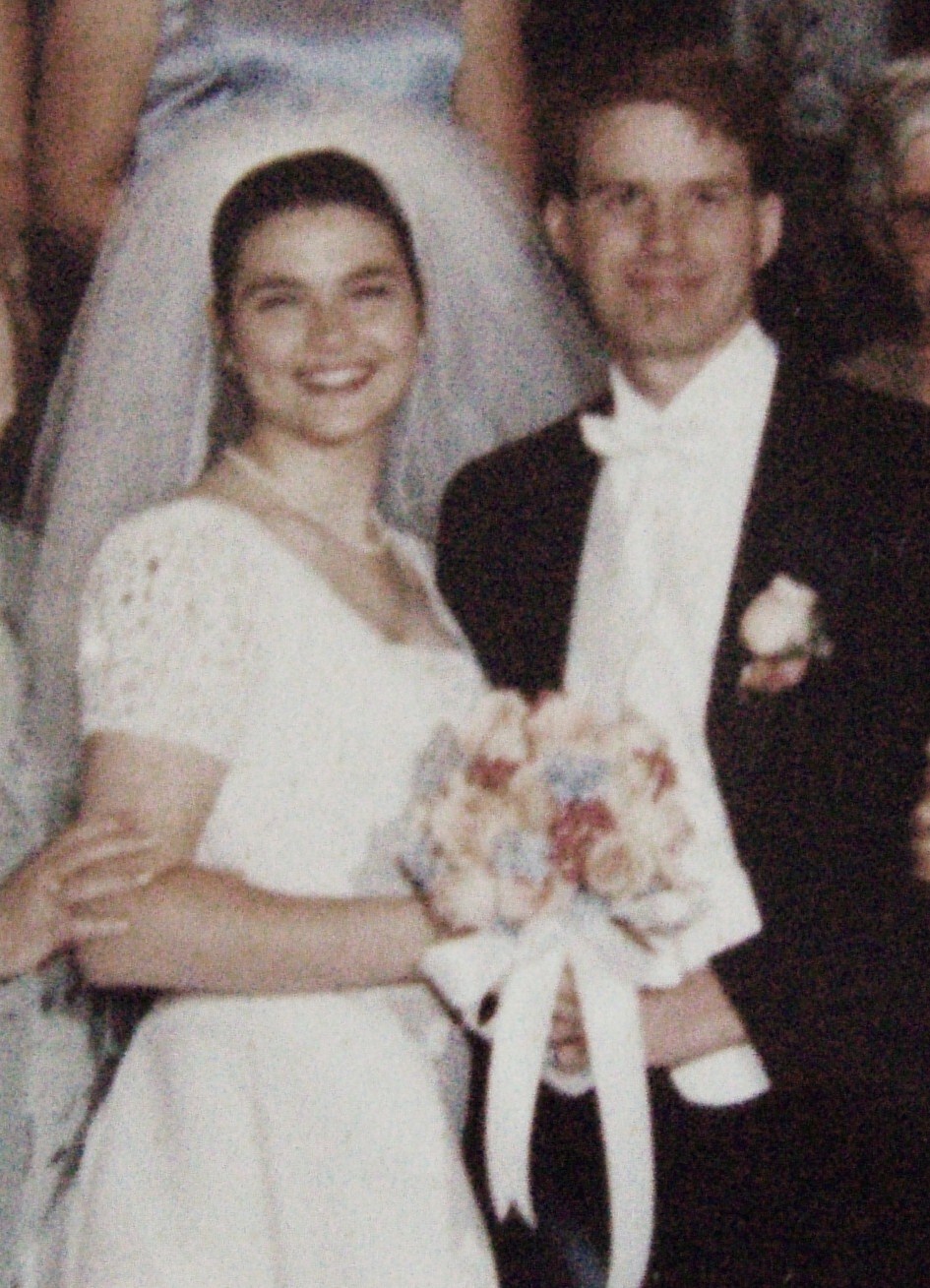 Our marriage by grace: 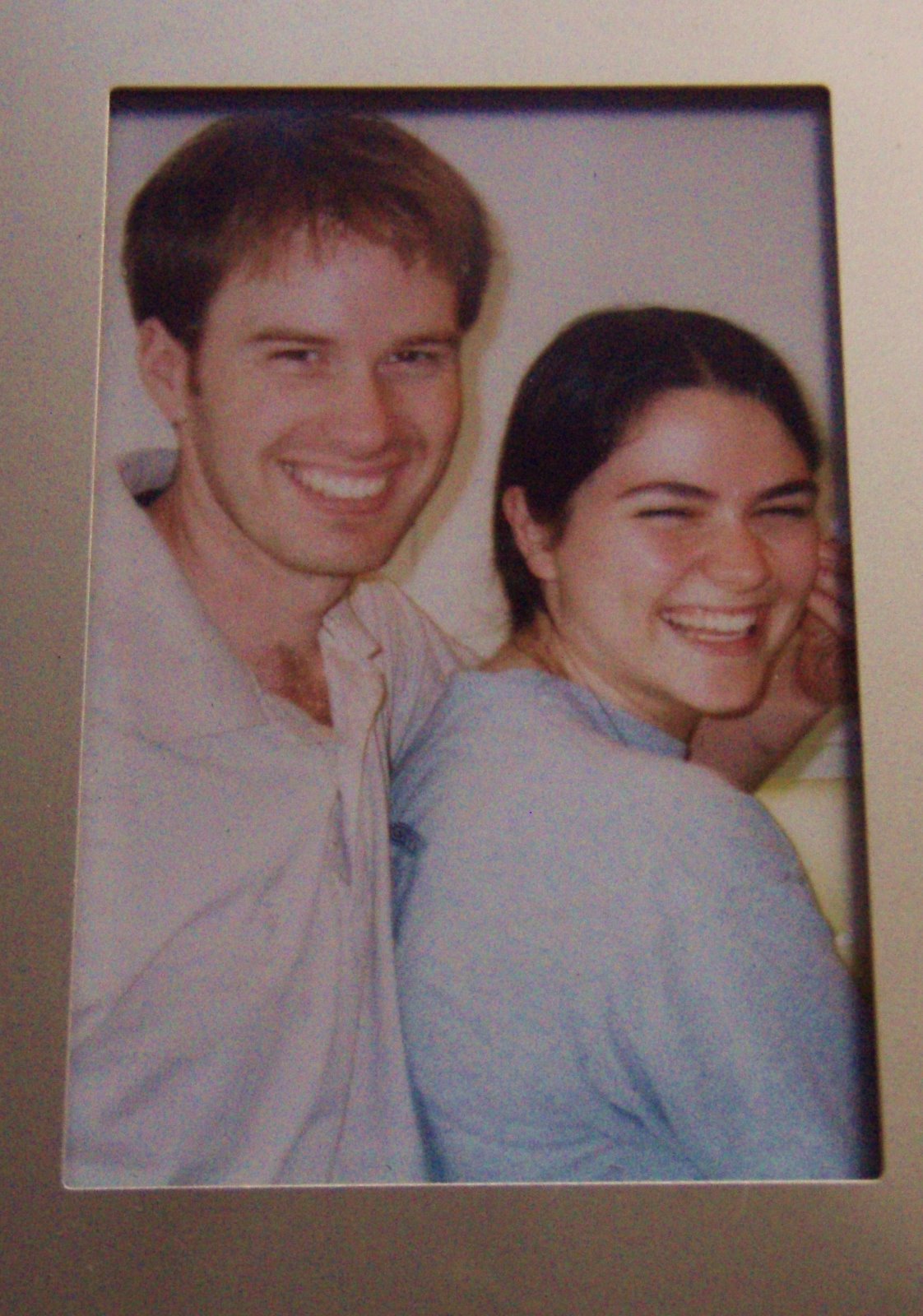 much more love than we started with

Here’s to the first decade!

Is there something wrong with your parenting when your 2-yr-old looks across the dinner table and says, “Have another tortilla? Or should I hold my horses?” 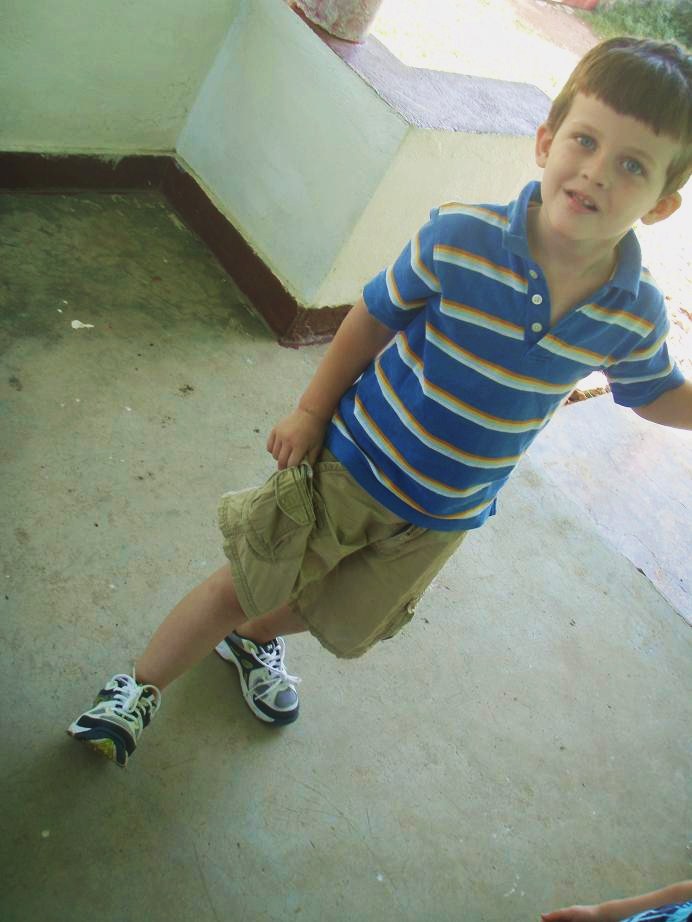 Joel is flashing you his brand new shoes. Stride Rite 1.5 XW to be exact. Yes, my Joel who is still technically 4 years old for a few more weeks is now wearing a men’s 1.5 extra wide shoe! Ah! Being the planner I am, I have to work hard to refrain from envisioning hundred dollar custom made size fifteens in my future… Anyway, getting our shipment and finally unpacking all those things we planned for and needing them feels good. And I’m sure his not-so-little wide feet feel good too, because he’s running laps around the house for fun! 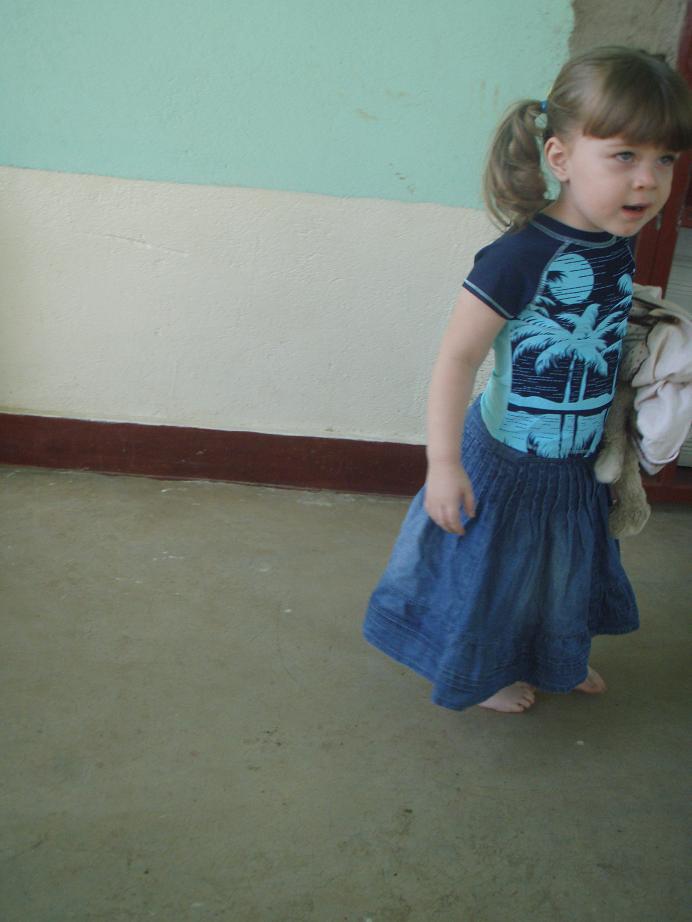 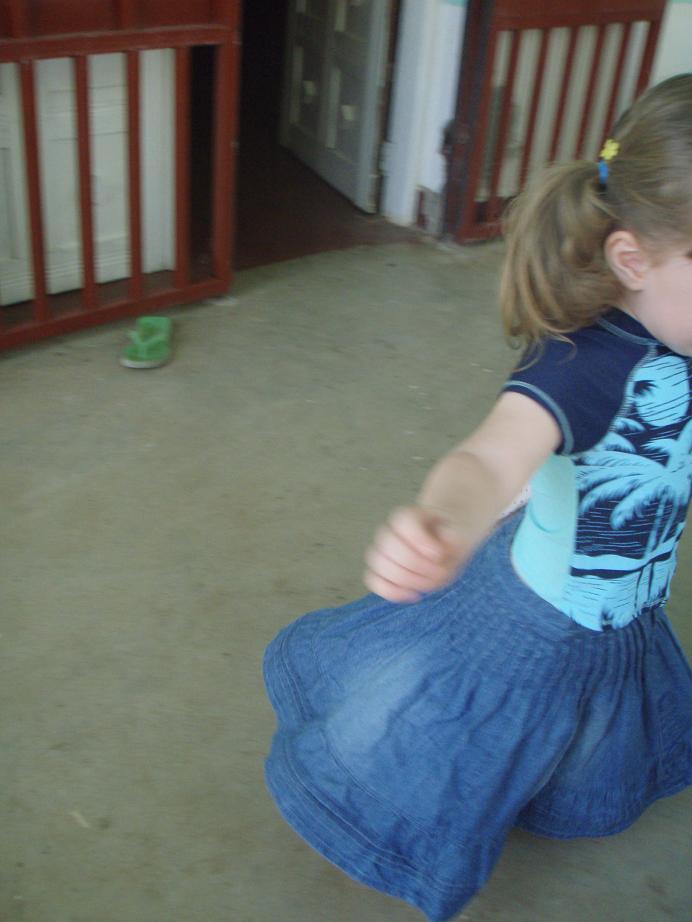 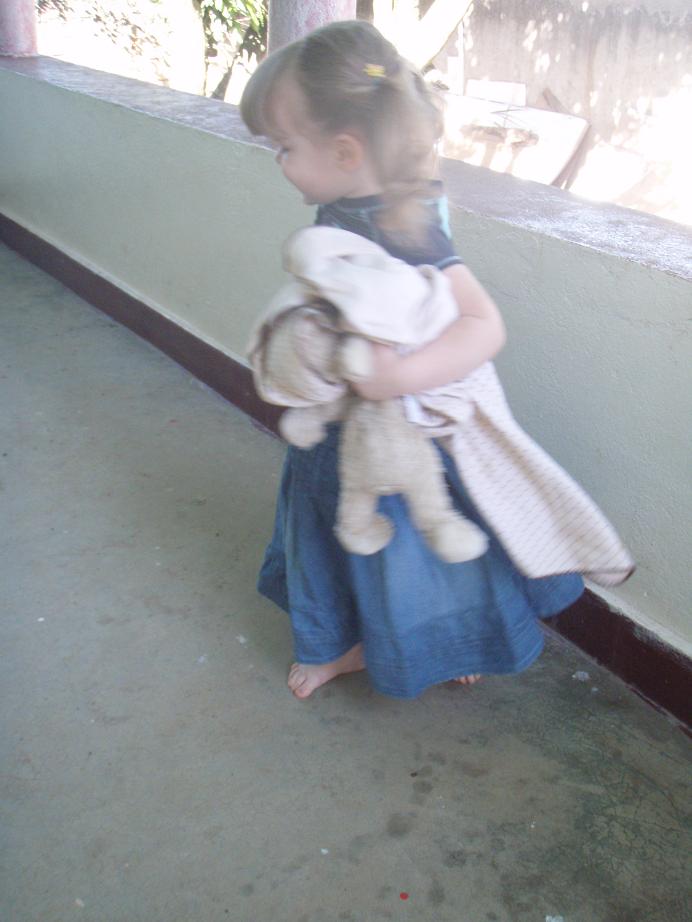 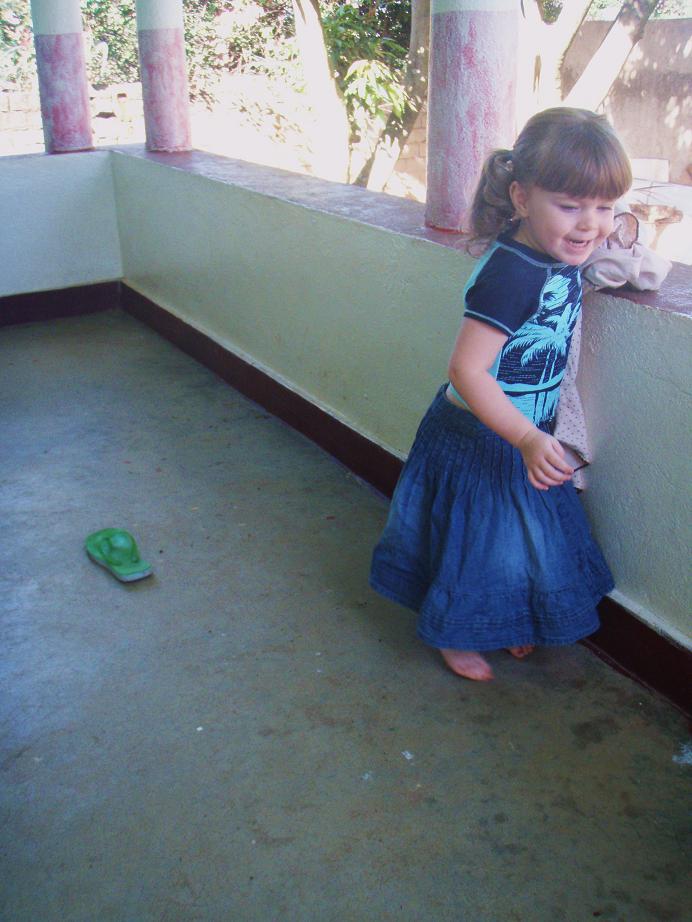 Anna has finally discovered twirling! We unpacked her new swimsuit
and she had to have it on immediately. You may also see 'bear' and
'bwanket' that Anna has carried almost everywhere for 3 weeks
straight. Then go twirl!

Well, I shouldn’t be shocked that 2 boys of 2 linguists living in a land of at least 2 foreign languages available to them at home on any given day would play with words. Last week James was reading one of my childhood favorites “There’s a Monster Eating my House” and for whatever reason ‘T Language’ was born and it suddenly became “Tare’s Tae Tonster Teating Ty Touse”. He can say it quite fast. It’s alarming.

He proceeded to read the entire book to his brother in ‘T Language’ (between chuckles) and a new trend began at our house. The boys have expanded this to include most every sound in English and have even tried asking in ‘B Language’ over dinner, “Ban bye bave buh blass bof bilk Bom?” Usually I try to humor them and reply, “Bes bif bou bay bleese!”

But this is getting kind of ‘old’ after 2 weeks of straight alliteration. Enough already! Tan’t twe tearn ta teal tanguage? Spending our energies on Swahili seems much more practical to me, but no one asked me!

And childhood passes all too quickly anyway.

I now understand firsthand how creoles are made. [For those of you not familiar with creoles: When two separate language communities are thrown together it is the first generation of children raised in that environment who typically ‘create’ a creole with regular grammar rules, etc. – I always thought it was interesting that it took a generation of children to sort it out.]

I love kids and the way they think.
Kent had a movie date with the boys a couple days before his trip. He decided they were old enough to watch Apollo 13 together. Of course the boys loved it! Somewhere in Joel’s 4-year-old head a ball started rolling. He was thinking a lot about space travel and the fact that it is not a very ‘safe’ thing to do. He asked me millions of questions about exactly what ‘after-burners’ do and how precisely the ‘heat shield’ had been destroyed. In exasperation I told him that I just didn’t know and he should ask his father as soon as he returns.

Then, as I’m unpacking hundreds of books, the boys discovered their Dad’s Calvin & Hobbes books. Really fun, a bit unorthodox, but James has been reading them to Joel every spare moment for a few days now. James found a hilarious page where Calvin gets a cold and is sneezing himself into outer space.

Joel with tears in his eyes: “Mom I feel like I have a cold!

“Honey, are you worried you will sneeze yourself into outer space?”

“No you will not sneeze that far, I promise.”

Which preceded a long discussion of real v. pretend and a slightly reassured little 4-yr-old Joel. He seemed much more confident after taking an anti-histamine. Hm. 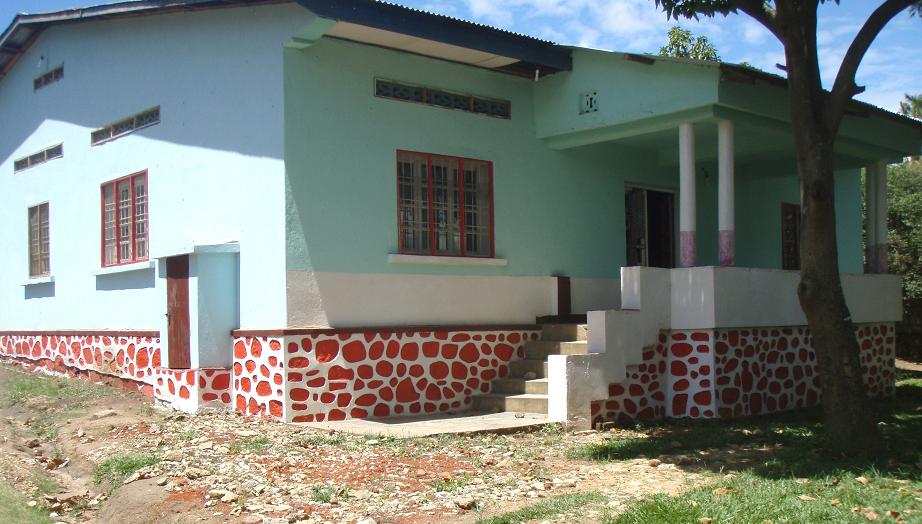 This is the view as you walk in the front gate. The rock work in the foundation is traditional for this area. I’ve seen it painted blue, black, red, green, etc. with white. The tree trunk you see is an avocado tree, and not far from it along the front lawn to the right are 2 mango trees. The ‘driveway’ for now is the dirt area to the left alongside the house. The front left window is Kent’s office (very small) and front side window is the school room/family room. The second side window is Anna’s room – with a pink curtain! 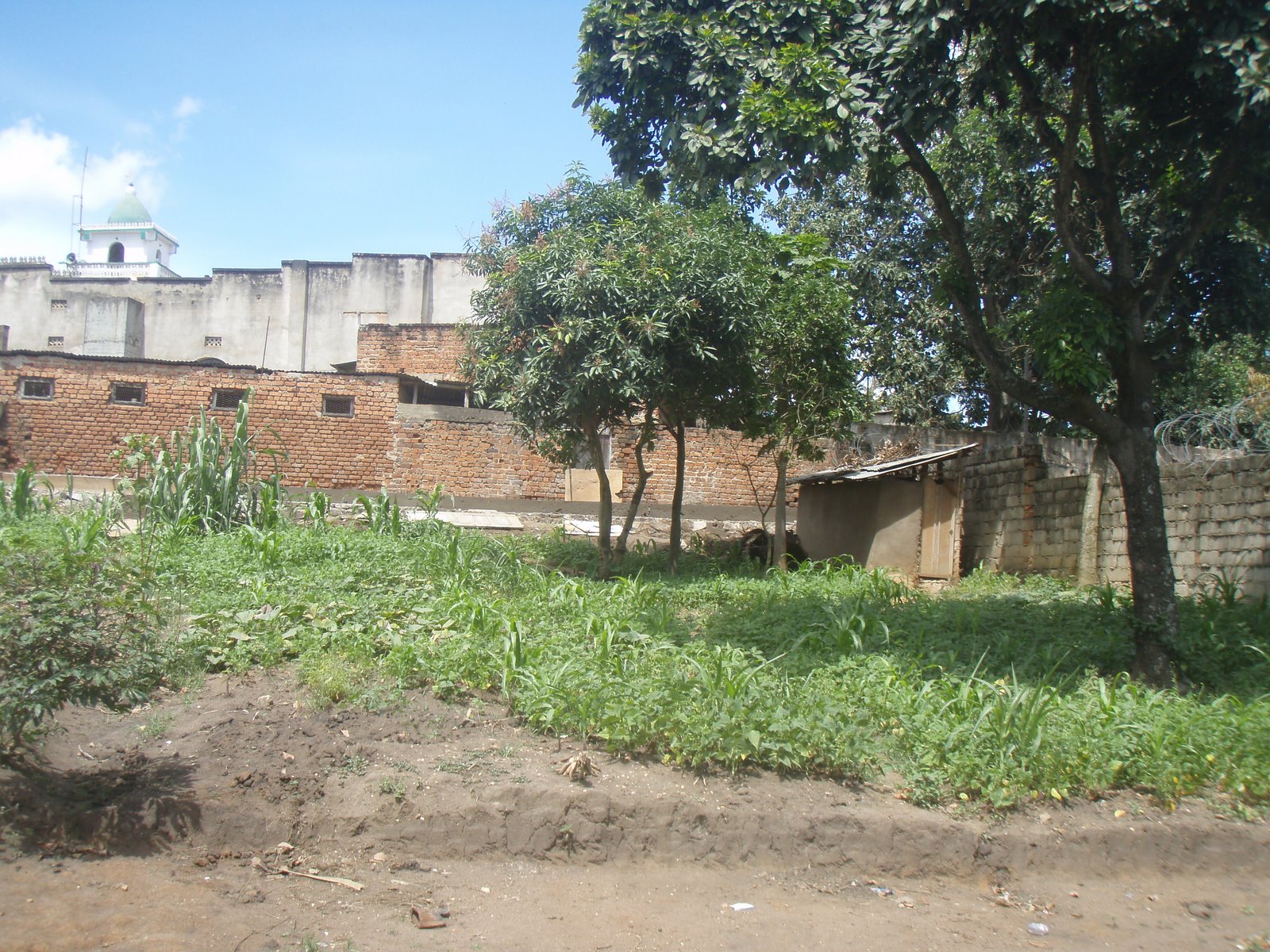 This is the view of our ‘farm’ from the back porch. The back wall is in the process of being rebuilt (higher!). This was used as a personal field for growing maize, beans, manioc, sugarcane, okra, squash, onions, passion fruit, papaya, and the trees are guava, mango and avocado. It looks much more overgrown now (most corn stalks now taller than me), three weeks later and we really must get weeding like mad to keep up with the tropical overgrowth! =) 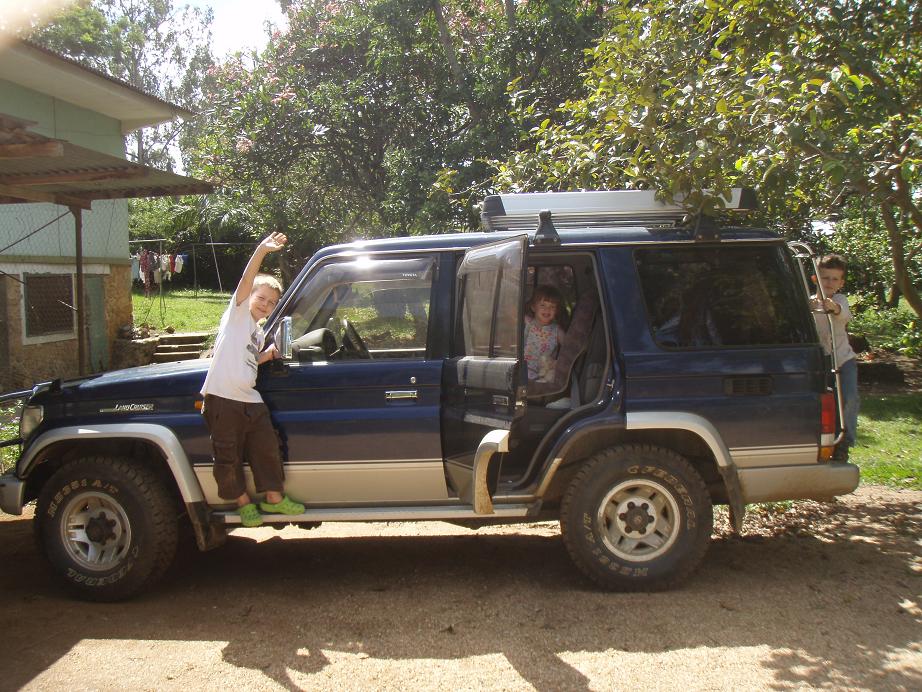 There’s the kids with the new-to-us car! I’m still not entirely confident driving such a behemoth on 4 x 4 roads, but we’re getting there. As a side note, this is probably the only country in the world which imports its cars from a British-system with the driver on the right (Uganda), and at the same time maintains the French-system roads – driving on the right. So when we drive we are actually on the outside of the lane. Probably terribly unsafe and all, but the main things we have to dodge are pedestrians, bikes and motorcycles, oh! and of course, potholes! =) …which never stay in the same place after a good rain…